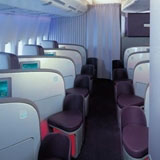 Airlines are investing millions in luxury business class cabins, but the designs are slowly filtering down to economy, says Sarah Balmond

Über-glamorous air travel is soaring to new heights, as the likes of Virgin Atlantic and British Airways continue to invest millions in their business class brands.

Yet, while business class passengers may be able to sip champagne at a stand-up bar or indulge in a spa, most air travel in economy class remains remarkably dull, with the usual tawdry, plastic trays, small fuzzy TV screens and cramped seating – an altogether more uncomfortable travel experience. Slowly, this is starting to change, as the glamorous business class design propositions trickle down to evolve the overall travel experience for those on a tighter budget.

According to the latest figures from the Civil Aviation Authority, a total of 229 million passengers passed through UK airports last year, more than 6 per cent up on 2004. With more people travelling than ever, airline design – which has always been big business – is becoming even more integral to a long-term business strategy, not least because it provides a key way for airlines to improve the passenger journey and win over loyalty from fickle consumers.

Currently, Virgin is working with Pearson Lloyd to redesign its economy and premium economy seats, following the relaunch of its Upper Class suite in 2003, for which Pearson Lloyd designed the seats and Softroom the interiors (DW 17 July 2003). Upper Class is positioned as a first class/luxury business class service (see news, page 5).

Meanwhile, Start Creative has refreshed the Virgin umbrella logo to bring cohesiveness to the brand across the Virgin empire. This has been applied across its various business groups, including Virgin Atlantic, and replaces the original Virgin Atlantic marque, designed by The Clinic over 20 years ago.

Virgin has also just completed the second phase of building its £11m flagship business class lounge, located at Heathrow Airport, working again in conjunction with Softroom. Designed to represent a diverse cityscape, the lounge includes a deli, poolside lounge, salon and spa, each marked out by a series of landmarks. The vast 2500m2 dedicated space features items by many of the design world superstars, such as bubble chairs by Eero Aanio and Verner Panton lights.

At the same time, British Airways is working with Tangerine, Davies & Baron and Winkreative on a £100m redesign of its business class service Club World (DW 23 March). While the Club World lounge, developed by Davies & Baron, is likely to have a more corporate face than the Virgin offer, its design could be just as extravagant. Specific details are being closely guarded, but the interior concepts will be trialled at other BA lounges around the world, before its launch at Heathrow’s Terminal 5 in 2008. Tangerine is understood to be designing the latest version of BA’s business class flat-bed.

Lawrence Hunt, the entrepreneur behind start-up airline Silverjet, a low-fare, all business class, long-haul airline, ponders the importance of excessive business class service extensions. ‘How many people want a massage and spa? The product is absolutely key. Passengers want to be able to sleep and eat. This is a good business class service at a third of the price,’ he says.

Silverjet will operate a fleet of ten aircraft, each configured with flat-beds. Hunt is currently seeking £25m to back the launch. Strategy and marketing consultancy Promise is putting a team together to look at the development of cabin interiors and the passenger experience for Silverjet. Promise is already working on the airline’s brand identity, in collaboration with Peter Stimpson (DW 20 April).

Charles Trevail, director at Promise, argues that ‘some aspects are more important than others – manicures and back-rubs aren’t that important. Sleep is. Currently, there is a battle for loyalty of the most profitable travellers. All airlines will say passengers are critical, but, in economic terms, economy travellers help on marginal cost, rather than paying for the airline,’ he says. 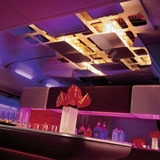 Oliver Salway, director at Softroom, believes the decadent business class environment does not sit at odds with a budget travel experience. ‘There is the same consistency of service in Virgin flights. It is not right to categorise people as cash cows. Virgin recognises that the same customer who flies out business class, [could] fly back economy,’ he says.

Paul Priestman, director at Priestman Goode, points out that it is business class travellers, having experienced a bad flight in economy class, who are, in part, driving the improvements in budget air travel. ‘It is interesting that the commercial push for change is coming from this angle. Airlines are trying to improve economy class to retain loyalty. If you have a bad experience, it upsets your relationship with the airline,’ says Priestman.

Priestman Goode has designed cabin interiors for the Airbus A350, which is due to launch in 2010 (DW 6 April). The designs could introduce innovations typically reserved for business class, such as more social areas and mood-enhancing virtual images projected on to a screen.

How quickly the economy class designs catch up with business class remains to be seen, but, given the profit margins, it may be a while yet.

The changing face of air travel:

• Cabins for Airbus A350 aircraft designed by Priestman Goode