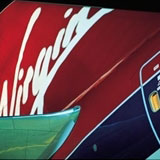 It is the first time Virgin Atlantic’s portfolio of economy seats has been redesigned in more than five years. Elements are being trialled, with the view to launching the first fully-kitted-out aircraft this summer. Seat comfort is one of the key issues being addressed as part of the project, which is being led by Joe Ferry, head of design at Virgin Atlantic.

The intention is to replicate the success of Virgin Atlantic’s £50m Upper Class cabins, which relaunched in 2003 with a fully flat bed, also designed by Pearson Lloyd, and a more glamorous interior scheme created by Softroom. Ferry is using knowledge gained from this project to develop a range of alternative designs for Virgin’s economy class chairs.

‘We have learnt from the success of our Upper Class suite and have used this knowledge and design to transfer it down to the economy classes,’ he says.

‘The Upper Class seat had such a big impact. It has raised the stakes for Virgin,’ adds Luke Pearson, co-founder at Pearson Lloyd.

Although he declines to reveal technical details of the chair, Pearson suggests that the revised designs will make a big difference in passengers’ perceptions of Virgin’s economy class.

Investing in economy seats marks a change in strategy for the premium carrier.

‘As fuel prices continue to grow and [luggage] weight becomes more paramount, this could tip the balance in the business case for reassessing economy seats,’ adds Ferry.

• No formal roster in place – outside consultancies appointed on project basis