Cervical cancer is, according to the World Health Organisation (WHO), the fourth most frequent cancer found in women. Around the world, more than half a million new cases are reported each year, and in the UK, this translates to more than 3,000 cases annually.

Almost all cervical cancer cases in the UK are caused by human papillomavirus (HPV), a common viral infection passed between people through skin-to-skin contact. With proper screening to identify high-risk individuals and provide early treatment, this also means that 98.8%  cases are preventable.

But for generations, the HPV screening process (also known as a cervical screening or smear test) has been mired in embarrassment, discomfort and taboo – to the point that in 2019, one in four women in the UK did not attend their cervical screening appointment.

With these statistics in mind, the team at Bath-based design studio Matter has launched a set of new concept designs for at-home HPV testing, with the aim of taking the procedure out of the doctor’s surgery, and empowering women in the process.

“These are conversations that need to be had”

The concept of at-home HPV screening is not new. In fact, as senior Matter designer Emilie Robinson tells Design Week, the team was inspired by the NHS’ own intentions to develop a home testing kit.

“[Considering the NHS’ project] helped us begin to think about how we would like an at-home test to be designed,” she says. “We really wanted to stretch the thinking behind the idea and provide more than one approach.”

The result was Sukha: three concept designs that Robinson says each tackle the issue from a different angle, that had the ultimate aim being to open up a dialogue about how alternative design-led approaches could help solve the problem. As Robinson explains: “These are conversations that need to be had.”

The first of the three concepts is called Your Space, and Robinson labels it as “probably the most approachable concept” for most women to get on board with. It plays on the familiar design language of tampons and applicators, aiming to provide an “intuitive” alternative to what Matter identifies as the wholly “disconnected” traditional cervical screening process.

The user would need only to insert the swab to collect the sample, just as they would a tampon. Once removed, the swab would be left to dry (thereby curing the sample) before the lid is replaced and it could be returned to a lab for testing.

Turning to the period care sector felt like a natural step for an at-home HPV test, Robinson says. This also gave the team some indication as to how Your Space could be sold too.

“Since a space for period care already exists across all supermarkets, Your Space could easily fit in on these shelves,” she says. “Seeing it in-store would help to reduce the taboo and awkwardness surrounding HPV and ultimately this would help break down another barrier.”

Approaching the issue from another angle, Matter’s second concept takes its cues from femtech. My Cycles focuses on a “more holistic idea of women’s health”, Robinson says, by combining HPV screening with the likes of period tracking, STI prevention or pregnancy testing.

Aiming to design a “lifelong product”, the product would comprise a “smart” wand device, which is linked to a smartphone app. Different heads for the wand (which Robinson explains could be recharged “as easily as you would an electric toothbrush”) could provide different diagnostic tests, one of which would be HPV screening. Users would insert the wand, collect a sample, remove the head and send it off for lab testing. The results would then appear in due course on the app.

My Cycles, Robinson says, could tackle an issue that came up frequently throughout Matter’s research: that a home test sample wouldn’t be as effective or reliable as one performed by a doctor.

“Because it is a ‘smart’ product, the app is able to tell you when you’ve collected a sufficient sample,” she says. “It essentially logs everything as a period tracker might, and would update you as and when a new test was needed.”

The final concept was the most “out there”, according to Robinson.

“When we spoke to women about the possibility of HPV home testing kits, many told us that they wanted something that could effectively provide tactile feedback,” she says. The Our Bodies concept, then, was designed by the team as both a means of collecting a sample, and a way to “self-explore”.

In this concept, a moulded silicone applicator would be fitted over a finger, which could then be inserted into the cervix directly to collect a sample. A micro-bristled head would provide “ample surface area” for this, and once collected, the user could invert the device and send it off to a lab for testing.

“Having your hands closer to the testing process means that many women felt more reassured of the process,” says Robinson. “And it’s a little bit more empowering, too.”

Effectively designing a series of medical devices, Robinson says that the process of creating Sukha was overseen throughout by medical professionals and informed by extensive research so that the team “could really understand both HPV and cervical cancer”.

“At each stage of the project, we’d take the concepts back to medical professionals for them to question, evaluate and validate our thinking,” she says. Additionally, the team worked with the Bristol Cytology Laboratory to explore the process of testing HPV screening samples.

The main challenge throughout was, understandably, the sensitivity of the task at hand: “We really just had to continuously think about the people who were involved, try to be as inclusive as possible – all while being completely medically sound.

“The core of what we were doing needed to focus on legitimate science – we had to make sure we were encouraging a correct way of sampling.”

The finished concepts then, are medically sound and could in theory be trialled and eventually rolled out to the masses. But for now, the intention behind the project is set on inviting dialogues on how cervical screenings could be approached.

“These are just three ways of doing it,” says Robinson. “It would be amazing to move forward with some kind of commercial product, but for now this project is intended to provoke conversation.

“The main barrier tied to HPV testing is that people don’t feel comfortable about it.”

To learn more about the concepts, visit the Sukha website. 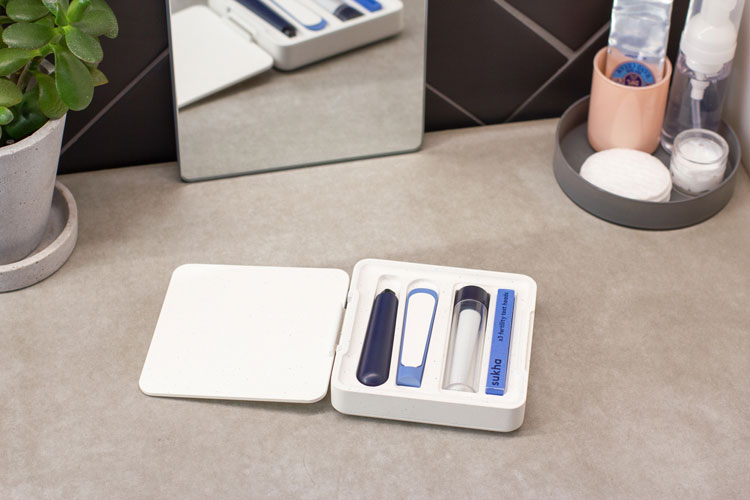