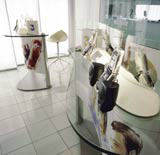 The stores, located in London’s Oxford Street and High Street Kensington and the Mailbox in Birmingham, allow people to experience the service and pre-order handsets before the product is available to buy towards the end of March.

Since 3 is a new service, much emphasis in-store is placed on ‘trial and demonstration’, says Stubbs Rich associate director Mark Hambury Young, creative lead on the interiors, who worked alongside Hamilton. ‘It reflects the ethos within the brand, which is cool on the outside and hot on the inside,’ he adds.

The format for the interior and shopfront is ‘very minimal’, he explains. Perspex panels can be backlit with different colours and the shapes of the ceiling, doors and display counters express the curvature of the 3 marque.

Coutts, led by creative director Nigel Stern, has designed aspects of the trial areas along with the interface of the ‘Holopro’ interactive display, says account director Matt Kavanagh. Arnold Interactive, under creative director Alistair Scott, has created imagery for an audio-visual ‘projection wall’.