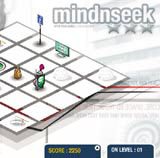 The Department of Health is launching an on-line game on Monday, the second tranche of the Web project end of its high profile, year-long mental health campaign.

Designed by Hoop Associates, the game, www.mindandseek.net, sets out to reduce the stigma surrounding mental health issues among 14to 25-year-olds. It follows the launch last week of the first site of the Web project, www.readthesigns.org, which is also designed by Hoop.

Mind ‘n’ Seek will carry the same content as Read the Signs, but in a more accessible way. The information is presented as a series of challenges in a quiz game format, which can net the user prizes supplied by partners like Sony, which is donating CDs, gig tickets and backstage passes.

‘The site is designed to capture the imagination of youngsters,’ says Hoop managing director Sean O’Halloran. ‘We want to de-stigmatise mental health [issues] among young people and change the language associated with it.’

By contrast, Read the Signs is a more serious, general information website aimed at parents and friends of people with mental health problems as well as health professionals.

Hoop won the work after being appointed to the DoH design roster in December.