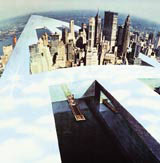 Why clutter the world with superfluous objects? And why design more kettles and chairs, when there are perfectly good ones out there already?

These were some of the questions asked by the left-leaning, avant-garde design group Superstudio, which was formed by a bunch of hairy hippies at the peak of the 1960s counterculture. Founded in 1966 by Adolfo Natalini and Cristiano Toralda di Francia (architecture graduates of Florence University), it was later joined by Roberto and Alessandro Magris, Piero Frassinelli, and Alessandro Poli. Stiflingly heritage-obsessed Florence – oblivious then to new ideas – may have helped spark the seditious, anti-consumerist ideas of Superstudio, and that other Italian collective, Archizoom, with which it’s intimately associated. (The latter’s founder, Andrea Branzi, and Natalini showed together in a 1966 exhibition.) Superstudio and Archigram – with Gruppo 9999 and UFO – are often bracketed together as exponents of ‘radical architecture’.

Now the fantastically theoretical, dystopian, anti-Modernist Superstudio is being celebrated – via collages, films, storyboards and furniture from the group’s archive – at the Design Museum.

But why? ‘We’ve covered Gio Ponti, from the 1960s, and Memphis, from the 1980s, so we wanted to cover the intervening Superstudio era,’ says James Peto, who co-curated the exhibition with architecture critics Bill Menking and Peter Lang and some of Superstudio’s firebrand members. ‘Superstudio is very influential, too, now. Royal College of Art architecture students are paying its films a lot of attention.’ Whether or not this hip 1960s revivalism proves a mere trend remains to be seen.

The curators must have had a tough task. Superstudio, which initially designed buildings, interiors and furniture (a nightclub, bank interior, candy-stripe sofas and its classic Quaderna table with graph-paper pattern) later produced work that was almost ludicrously theoretical and virtual. By 1969, it had eschewed making buildings or objects, since both ‘codified the bourgeois models of ownership’. An irony of Superstudio was that, by dismissing its profession, its members threatened to render themselves redundant.

Its Histogram collages and furniture-like sculptures in the form of homogeneous, grid-like structures satirised the reductive aesthetic and supposed universality of the ‘international style’.

The exhibition includes an installation of these sculptures, as well as its famous Continuous Monument collage. In this, a white, geometric structure cancerously spreads and engulfs iconic places like the Rockerfeller Center and Taj Mahal. Modernism was lampooned, too, in the book, Ideal Villas (also on display). A spoof ‘catalogue’ of houses designed, a priori, in the Modernist idiom, this showed how Modernism arrogantly ignored individual tastes. Small wonder Superstudio is often seen as the forefather of Postmodernist groups Studio Alchymia and Memphis.

But, by contrast to these, Superstudio was anxiously political, even proto-eco. Its film, Life: Supersurface (also on show), romantically extols nature, complete with a silly scenario of hippies gambolling in the countryside. Later, Natalini, an architecture professor, asked his students to examine Italian peasant culture – the unchanging architecture of its shelters and farm implements – in a proto-eco celebration of sustainability.

You wonder what Superstudio achieved: it had a tiny, rarefied academic audience. Yet it was admirably consistent. By the time it disbanded in 1978, it had come full circle: its endorsement of sustainable design echoed its refusal, a decade earlier, to litter the world with extraneous objects.

Superstudio – Life without Objects is at the Design Museum, 28 Shad Thames, London SE1 from 1 March to 8 June

Designers can contribute creatively and strategically

Pre-tax profits down at WPP