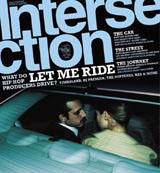 Intersection, a magazine that bills itself as ‘representing the cutting edge of automotive design, style and culture’, re-launches this week. Previously a twice yearly publication, the magazine will now be available bi-monthly. Intersection designer Yorgo Tloupas claims the magazine has no direct competition. ‘No attention has been paid to car magazines’ design [to date]. They are aimed at motor-heads and tend to be technical and macho rather than design and art driven,’ says Tloupas. ‘Car magazines use stale imagery, and I’m interested in exploring this domain,’ he adds. Tloupas, who explains that he is influenced by 1960s and 1970s magazine styles, claims Intersection will lie between ‘minimal art mags and more mass-market-style mags’. The first revamped issue features a cover (pictured) with photography by Alex Cayley from the Creative Exchange Agency. Costing £3.50, the magazine will be available throughout the UK from today. International distribution is also planned.