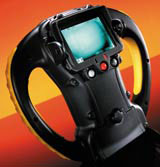 Imagine a future where a printer can produce virtually any object you desire – from cutlery, ceramics or jewellery, to even electronics and gadgets – in three dimensions, in any material you desire, as quickly and effectively as your current 2D printer produces images.

Imagine that these products you have designed and manufactured are in real materials including glass, silver, plastic or wood. Imagine designing and ‘growing your own’ personal mobile phones, copies of your Adidas Rekords, Manolo Blahniks or Omega Speedmaster, which can then be used or worn as part of your daily life.

Imagine the revolution in industry, retail and economics produced by such a printer and even the demise of the professional designer. Imagine a technology that may be as epoque-making as the automobile or computer – the word ‘homemade’ taking on a whole new resonance – where with sufficient data (and resources), anyone can produce products, clothes and accessories via their computer or network (or whatever we will be using in a decade or so) both in and for their own homes. This is a world where everyone can be a designer, a manufacturer and a consumer all at once.

Before you gaffaw out loud, consider first that this is not an idle fantasy, as elements of such a heaven or hell already exist. For a few years now, Rapid Prototyping (a catch-all term for a number of related techniques and technologies for the realisation of a design in three dimensions) and more specifically, 3D Printers, or 3DP, have been available, which, in effect, create any form using 3D computer-aided design data from a box the size of a photocopier.

These printers use laser or inkjet technology to build up multiple layers of a resin or UV light-sensitive photo polymer just 20 microns thick (about 0.05mm), each instantly cured before the next layer is applied and repeated until the form is complete. Almost any simple or complex form that you and your CAD package can conceive can be reproduced accurately, in a matter of hours and three dimensions.

Generally speaking, the driving force behind all RP technologies has been the compression of product design and development cycles and the reduction of costly cul-de-sacs or mistakes. The broadly similar RP technologies of Stereolithography Apparatus, or SLA, and Stereo Laser Sintering, or SLS, rapidly create 3D objects, enabling design and production teams to test a design quickly and effectively through these very accurate and realistic interpretations of a manufactured item.

But the speedy realisation of an idea in 3D has benefits beyond those of the process, including the ability to test appearance, function and colour with consumers or clients before incurring the relatively high costs of production. Consumer testing and group studies can be a valuable tool in reducing the burden of doubt even further, and they offer designers additional insights into consumers’ reactions to the three-dimensional object.

Most product designers are familiar with this kind of RP in which a limited production of identical copies can be produced for testing in virtually any material, but usually simulating thermoplastics such as ABS and polypropylene. More excitingly, emerging RP materials include accurate representations of contemporary polymers, metals (including stainless steel and titanium) ceramics and even wood and paper; and this materials list will expand as demand grows.

The ever increasing speed of development cycles in motor sport, such as Formula One, has been greatly assisted by RP and Rapid Tooling (essentially using CAD data to create quick tools for limited production), where ideas can be speedily created in 3D then tested in wind tunnels and test beds in the correct materials before committing to a final iteration.

The crucial thing for designers in all disciplines is the control that he or she retains. The RP process is no longer solely in the hands of prototyping agencies, and with the advent of desktop 3DPs, the immediate realisation of an idea in 3D will be as gratifying as, say, digital photography. While the most sophisticated examples of RP are in the hands of high level industrial and commercial enterprises, the lines are already clearly drawn for potential consumer 3DPs in the medium future.

Ironically, while it has been crucial for product designers to develop the diplomatic skills to manage working relationships with specialists in a range of specific fields, it is that very process of interaction that can result in subjective interpretations and compromise.

Traditionally, a clash of cultures existed most defiantly in the relationship between designer and model maker. In the days when an ‘old school’ model maker would use his artisan-derived skills to create a representation of a product concept in wood and primer (which compared to the accuracy and efficiency of RP may as well have been wattle and daub), and perhaps employ a certain amount of ‘interpretation’ along the way, the results could produce mutual antipathy.

Many product designers will have been introduced to this troubled relationship via their college ‘technicians’; the educational experience often becoming a good primer for the realities of professional model making ‘before RP’.

Thankfully things have moved on considerably since those days, to the point where the relationship between designer and prototyper is more like that of a movie director and cameraman; where the possibility of misinterpretation (or indeed any personal ‘interpretation’) is almost non-existent.

A lot is at stake in terms of clients’ budgets and time scales, and the margins for error, either technically or functionally are being reduced considerably. A more remote relationship it now may be, (with CAD files supplied by e-mail), but one that will be diminished even further by affordable 3DPs in the studio (a 3DP package starts around £9000).

For product designers, the ability to realise an intangible idea in three dimensions as swiftly and controllably as drawing, is practically Valhalla. The prototype usually represents the first tangible realisation of a design concept, much more resonant than a rendered CAD image or foam model, and so has a central, almost emotional importance in the helter-skelter ride of product design.

Naturally, the recent 3DP revolution in prototyping has meant more to designers than merely time compression, predictability or accuracy, but also a greater feeling of confidence in an idea earlier, as it can be realised without the time lag produced by an outside prototyping agency. The very idea of a 3DP sitting on the desk producing three dimensional ‘prints’ of a design, must be on a par with limitless Green & Blacks ice cream. Although, irony of ironies, almost all output from 3DP’s still need skilled finishing by hand.

Revolution is perhaps an overused word when used in conjunction with technology, where so much is promised but seemingly never delivered, but it can be applied confidently to the advances in design and the possibilities that RP offers for the future.

3DPs are not just for designers, architects, and engineers, but have their place in medical applications such as reconstructive surgery, in aerospace and art. These technologies will eventually allow everyone with a computer to realise anything in 3D at home and at the office. In effect, desktop manufacturing.

Ultimately, the control of raw materials and data – the intellectual property – will be the key issues governing the development of true home manufacturing, a kind of Napster for products. Maybe not so revolutionary, after all.

Part of a new range of interactive Web phones, Neptune 1000 is the latest version of a public-use Internet terminal, produced by Marconi as part of an agreement with BT. A Web kiosk with Internet-browsing abilities and a modular design, it can include printers, webcam facilities and broadband connections. SLA rapid prototyping techniques were used to develop the kiosk .

Palm Butler was designed for Danish company Homelinc by Smallfry. The product allows you to access information on a PC through the television and stereo, for example, playing DVDs and MP3 files. Both SLS and SLA were used during the development of this product.

One of two white block models created by CNC milling during the development of the Mitsubishi Trium by Fitch London. This was the more detailed prototype (far left) used to demonstrate and visualise the entire product with all its physical features.

The user-driven features of the Sonicaid One, such as interface, size, appearance, colour and cable storage, are conventional product design issues, but the project shows how designs can be realised using the benefits of 3DP. No conventional modelmaking was used in the project, the design was developed in 2D and 3D CAD, and all early assessment and function studies were conducted with animated 3D images. The data, in the form of STL files, was then e-mailed to an RP agency.

A thermal imaging camera that allows firefighters to see in darkness or thick smoke. Alloy undertook the mechanical and industrial design of the enclosures, modelling them in 3D CAD. Several iterations of SLA and SLS rapid prototypes were used to check that a range of electronics packages would fit and to test the crucial ergonomic performance.