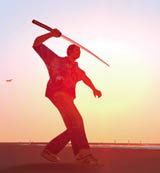 Browsing through the Sunday papers a while back I read a piece in The Observer about a trial in Sunderland using electronic tagging on juvenile recidivists. Seventeen-year-old Stuart Anderson, already with a record that includes arson and theft of a motor vehicle, is ‘one of some 30 persistent offenders in Sunderland on the Home Office’s Intensive Supervision and Surveillance Programme, a scheme aimed at tackling the worst juvenile crime in England and Wales.’ Stuart’s obviously been a bad boy, and how, as related in The Observer, will this criminally minded young man spend his evening? ‘He will spend the evening on his PlayStation 2 attempting to complete Grand Theft Auto: Vice City, speeding through the streets of Miami, crashing stolen vehicles and killing policemen.’

When last month Culture Minister Kim Howells spoke out about the effects of violent video games as ‘playing to the lowest common denominator, which is a kind of vicarious pleasure in spilling blood’, lots of commentators assumed he was referring to Vice City. While Vice City has almost become a shorthand for everything that is wrong with our culture (along with rap music, university fees and asylum seekers), Howells could also have mentioned that it’s been shortlisted for the Design Museum’s new Designer of the Year competition and despite (or perhaps because of) its 18 certificate is the fastest selling UK game in history shifting 250 000 copies in its first weekend. Obviously the people behind Vice City are doing something right.

Vice City is the follow up to Grand Theft Auto III, which sold more than 8 million copies and generated around $400m (about £250m) in sales – more than most big Hollywood movies. Like the previous titles in the series you get to see and relate to the world through the eyes (and guns, cars and crimes) of the hero of the piece. The point here is that the hero in the GTA series is not a very nice man. In the case of Vice City this is the 1980s world of over-styled cop shows like Miami Vice, populated by the crew of some Scorsese movie, and the lead character is Tommy Vercetti (voiced by Goodfellas actor Ray Liotta). What he can do you can do – steal cars (and motorcycles, boats, helicopters, ambulances…), hurt people (with cars, guns, fists, bad language) and spend your ill-gotten gains on easy women.

Vice City is published by Rockstar Games, with offices in Edinburgh (Rockstar North, previously known as DMA Design), London and New York that are in turn subsidiaries of Take-Two Interactive. Rockstar was founded by Sam Houser, his younger brother Dan and school friend Terry Donovan. When looking at the history and trying to pin down what it is that makes Rockstar perhaps unique among games companies, there is a long period of time when all three founders worked at BMG entertainment in film and music before moving to the world of games, and it is these heightened production values that have given the games their edge. Certainly, when you first sit down with Vice City, what overwhelms you more than anything else is the lifestyle that’s presented to you, and not just bits here and there, but the completeness and totality of it.

‘While Vice City isn’t breathtaking graphically,’ says Mike Bennett, creative director at ad agency Avision and big-time gamer, ‘it captures the essence of [1980s-style] Miami fantastically – its richness is in the blend of detail it uses to portray this. From the radio stations (1980s tunes and all) and banal chat shows, to the newspapers blowing in the wind that have headlines such as “Elvis Found On Moon”.’

But what about the accusations of excessive violence? It would be easy to say that these are probably comments made by people who’ve never played the game, but it’s more fitting to point out that the level of violence in this the comic-book, twilight world of Vice City is no worse than the axe-wielding decapitation that Jerry dishes out to Tom. And the player can choose – the gameplay itself doesn’t demand the massacre of pedestrians – that’s the responsibility and choice of the player.

Alice Rawsthorn, director of the Design Museum and chair of the Designer of the Year competition, has no doubts whatsoever about the value of Vice City: ‘It’s there totally on its design merits. Visually and technically, in terms of the narrative it’s much more complex than any other game – it is a genuine leap forward.’

Designer of the Year is on show from 1 March to 29 June at the Design Museum, 28 Shad Thames, London SE1

Designers can contribute creatively and strategically

Mind your own business