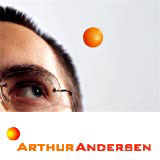 Management consultancy giant Arthur Andersen has been rebranded by Enterprise IG in the branding specialists biggest ever single project.

For the past 18 months Enterprise IG has worked to globally reposition the business consultancy, in partnership with teams from Arthur Andersen and Enterprise IG’s parent WPP Group.

A new visual identity is now being rolled out across Arthur Andersen’s print, screen and environmental communications interfaces. The group is also relaunching its website, redesigned by Ogilvy & Mather Interactive in New York, also owned by WPP.

Arthur Andersen is repositioning itself as a partner for success in the “new economy” in which technology meets traditional business, says Enterprise IG chief executive (Europe and Asia) Dave Allen.

“This is possibly the biggest rebranding project that our industry has ever been involved in. It is just about as comprehensive a change programme as can be achieved,” he says.

Enterprise IG conducted extensive research with some 300 partners of Arthur Andersen’s international network, to develop new brand architecture for the group and its new identity.

A 24-hour webcast in 24 international locations marked the relaunch this week, including press advertising, also created by Enterprise IG, in the Financial Times, USA Today and The Wall Street Journal. Allen says the consultancy intends to expand its advertising capability and has established a team to do so.