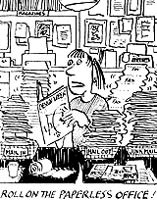 On a cold Tuesday in December, I was one of the Design Council guests invited to hear Tony Blair congratulate the audience on their ingenuity.

The last tranche of Millennium Products was being honoured. The complete set was due to be displayed in the Spiral of Innovation in the Dome.

We each received an invitation card, which maintained the illusion that the location of the event was secret. None of us were actually told (but presumably meant to guess) the venue.

We were given a departure point (in my case Savoy Pier) which suggested it could be the Design Museum, but it was more likely to be Greenwich.

So here, we thought, was a chance to visit the Dome ahead of New Year’s Eve. The fleet of boats along the Thames was full of ideas people and entrepreneurs, the companies honoured for their Millennium Products.

Great people from a variety of disciplines, but sharing a passion for innovation. I envied the achievements of my fellow passengers.

An inexpensive means of anticipating metal fatigue in aircraft. Software to enable a computer to provide access to successive pages of archive material. A more effective washing machine. It holds almost 50 per cent more clothes than a conventional machine, yet looks the same size.

And all of these inventors and innovators – ordinary, nice, modest – genuinely interested in the others’ areas of expertise. And all eager to see their inventions in or around the Dome.

Alas, for the vast majority, their hopes were dashed. A few products were displayed in the entrance to the Skyscape, the vast auditorium adjacent to the Dome where the presentation took place. The Spiral of Innovation was not yet ready. This, despite the Prime Minister’s assertion, in his upbeat and infectiously enthusiastic speech, that everything was on time and on budget and that we, the audience, were to be granted a sneak preview of the Dome and all its wonders.

Never mind, the event was inspiring. And Blair? Likewise, especially when talking to the winners – genuine interest, no condescension, in the immediate presence of photographers and TV crews. It made me wonder why he needs spin doctors.

If the products presented to Blair, plus those in the entrance display, are an accurate sample, then there is true evidence of British genius at work. Blair praised the country’s ability to demonstrate that the new century will belong to those with the knowledge and innovation to dominate it.

Judging from what was on show, I discerned a thematic connection: knowing what to do with less. What is innovation about? Doing without. Take the Baylis Freeplay radio – doing without batteries – or the Dyson vacuum cleaner – doing without a bag. The Adaptive spectacles – doing without an optician. Ideal for developing countries. Just rotate the fluid-filled lenses to bring your prescription into focus. The Autosub does without a crew, the first “intelligent” submarine. It can dive to depths of four miles, piloted by operators on the other side of the world.

The Intrajet, the hypodermic that does what it does without a needle or drawing blood.

Paradigm shifts can happen when you remove one of the seemingly essential components of the existing product or service. The popular terminology indicates the removal: horseless carriage, wireless, cashless society. First Direct – a bank without a building.

A newspaper’s website provides real-time news – news without paper. Conversely, the newspaper itself, unable to compete with real-time, concentrates on comment, in-depth background and opinion and becomes a paper without news.

Advocates of the new technology promised us a paperless office. I’m not sure I’ve ever seen one or even met anyone who has. The new technology may enable us to communicate on screen, but the old psychology has ensured we keep hard copies and send more copies than are necessary to anyone with an interest, however slight, in the subject matter. All grist to the paper mill.

Will e-mail kill traditional correspondence? Will e-commerce kill supermarkets? Has cinema killed the theatre? Has TV killed the cinema? (Video on demand may dent Blockbuster. We shall see.) Meanwhile, magazines multiply. Radio renews itself. Television shows no sign of succumbing to the Net, especially when TV commercials provide a useful means of communicating a website address.

Paradigm shifts there may be. And in the world of new inventions the new may push out the old. But media resolutely refuses to be a zero sum game.