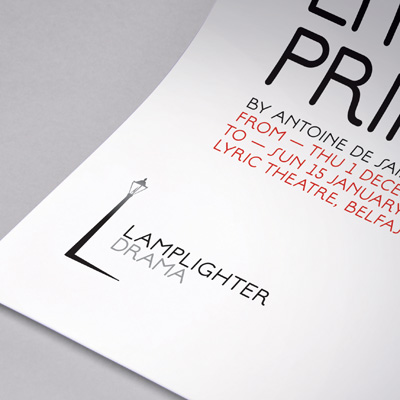 Lloyd Webber, whose initial production for the company will be The Little Prince at Belfast’s Lyric Theatre, approached the consultancy about three weeks ago having been impressed by a packaging project it had worked on.

The project involves creating the identity and branding for Lamplighter, which will be applied to all materials including brochures, programmes, posters and promotional literature.

Tommy Taylor, creative partner at Alphabetical, says, ’We are creating an identity which bows to [the founders’] credentials within the industry and heralds the new forms of digital media present on their stage.’

He adds, ’They’re connected to the Lloyd Webber dynasty and were heavily involved with the Oxford Shakespeare Company, so we had to produce something that reflects that but also pushes it forward – we wanted it to look sophisticated.’

Alphabetical is also creating the website for the company, as well as comprehensive photography and brand style guidelines. The consultancy has created an identity reflecting the Lamplighter name, using a silver and black palette to give the appearance of light being cast across it.

Taylor says, ’It’s about projecting light and having a presence on stage – the rest of the branding followed that.’

The identity will be seen on stationery and a microsite, before the main launch in December, when it will be used on posters and programmes.