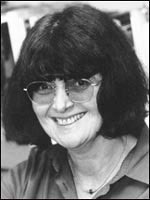 ‘I’ve said I’m going to retire since I was 28 and I haven’t managed it yet,’ says Lynn Trickett, co-founder in 1971 of the quiet, but successful graphics company Trickett & Webb. Now 55, she has no immediate plans to leave the profession which she joined in 1966 after graduating from Chelsea College of Art.

‘At that time people didn’t really know what graphic design was. It was terrific to be in at the start,’ she says. She worked for multidisciplinary design group The Planning Unit and paper company Wiggins Teape before setting up Trickett & Webb with business partner Brian Webb. While admitting design is a far more serious business than when she started out, she still enjoys her work, putting this down to keeping a steady staff of ten designers to allow her to remain hands-on. ‘Brian and I are designers and we don’t want to relinquish that side,’ she says.

Trickett is very proud of Trickett & Webb’s stamp design work for The Royal Mail over 17 years and its recent work for The London Institute, but she also remembers the tail end of the recession in the early 1990s as being a low point.

Now, as a regular external examiner, Trickett is concerned about the rising student numbers and declining standards in design education – for her, the most negative change in the design industry during her career. ‘Potentially, things are changing for the worse,’ she says. ‘Before, the best students were coming out of the UK, now it’s not always the case. As a country we need to invest more in education.’ Yet personally, she’s looking forward to many more years in design. ‘I can’t think of anything else I’d want to do. It’s wonderful to be able to go in and meet clients and produce things that you didn’t think you were capable of,’ she says.