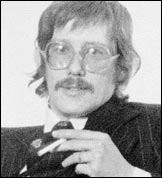 At 60, Peter Sampson reckons he works just as hard as at any time during his 35-year career. Currently chairman of Corporate Edge, he was co-founder of Sampson Fether in 1966, working on key brands such as Silver Spoon and Yale before joining PA Design in 1979.

He joined Michael Peters Group in 1986 as a main board director, taking over as managing director of MPL in 1990. ‘I’ve always enjoyed it so I don’t feel I’m just working until I retire. Design is a fantastic subject. Every project differs. Every client differs. Every one is an exciting new adventure,’ he says. He has found maturity an advantage in business: ‘The older you get, the more experienced you get, and the more people allow you to work on big projects and be involved in small ways in big events. It gives you a buzz.’

He regrets the culture of longer hours in today’s design world, seeing it as a ‘serious concern’. ‘I work harder, the hours are longer and there is more competition. It’s probably still just as much fun – maybe not for us dinosaurs, but for the youngsters,’ he says. Retirement, although not imminent, is at the back of his mind. ‘I have been going to cut down to two or three days a week for the past five years… but it will happen. The best thing for people like me is to gradually ride off into the sunset,’ he says.