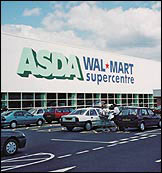 The opening of the first rebranded Asda Wal-Mart Supercentre in Bristol earlier this week could be the start of radical changes across the UK retail landscape.

The first of three rebranded stores due to open this year, and ten over the next five years, the 8640m2 Bristol site is a clear indication of the US giant’s growing impact on Asda, which it bought for £7bn last year. The majority of the design work has been developed in-house, with Rawls & Company and Silk Pearce also creating certain in-store elements.

As part of the plan to divide the store more in favour of non-food products, unlike the previous 60/40 split in favour of food, the Supercentre has introduced six new departments – a vision centre, photo-processing shop, George Baby shop, sports shop, “wellbeing” centre and electronics department. Non-food currently accounts for 56 per cent of product, increasing to 60 per cent in due course in all Supercentres.

Brian Rutherford, head of design and project manager for the Asda Wal-Mart Supercentre, says customer feedback found a need to reduce the impact of the store’s size. “Customers said it was too big, so we went from having one entrance to having two,” he explains.

“There are now four sections – Fresh, George, food hall and general merchandise – which make the Superstore half Asda, half Wal-Mart. Splitting it into slightly more manageable chunks will enable people to do “fresh” shopping in one part without needing to go into the whole store. All the new Superstores will be set out this way,” he explains.

The most obvious sign of Wal-Mart’s increasing presence within Asda is the introduction of three US models which have been adapted to suit the UK market.

The vision centre will carry a full optician service and has been based on a US-developed prototype, with development carried out by Asda’s in-house design team. The same has occurred for the pharmacy and photo-processing elements which will be rolled out to all Asda Wal-Mart Supercentres.

“Visually, they’ve been adapted, but not functionally. The colours changed to tie in with the rest of the store,” adds Rutherford.

Though one of Asda’s main objectives is to increase the ratio of non-food items in its Superstores, Rutherford states that the group is “trying to avoid becoming a department store.

“The whole ethos behind it is product and price. What we’ve done is more aligned with the UK market and more simplified. As we have the ability to put in extra ranges, there will be a move to higher fixture holdings,” he says.

Continuing its three-year relationship with Asda, graphic design consultancy Silk Pearce has developed some new in-store graphics and hanging signs for the Bristol outlet’s specialist areas, including the fishmonger, rotisserie and butcher. Existing designs are also being used for the bakery, rotisserie and delicatessen. Silk Pearce design director Peter Silk says the graphics are “not dissimilar” to those in other Asda stores. “We have further developed the signage as part of an ongoing process. Asda takes the best of what it’s done before and takes it on further.

“We have given personality to the serve-over areas, introducing quite a lot of colour into them, and capturing the essence of each area in the lettering style. I think display graphics are going to be more concentrated in these areas,” he adds.

A spokesman for Echochamber – a retail research unit linked to retail design group Rawls & Co – believes Wal-Mart’s growing power in the UK will spark significant changes across the entire retail sector in the next few years.

“Supermarkets will have to decide if they should take Wal-Mart on head-on or move out of the sector altogether. A vast gap is evolving with Wal-Mart, Aldi, Lidl, Kwik-Save, Cosco and Macro at one end and Waitrose, Marks & Spencer and Planet Organic at the other, and chains like Sainsbury’s, Safeway and Somerfield hovering in the middle,” he says.

He claims that “every other retailer”, including those outside the leading supermarkets, is being “seriously affected” by Wal-Mart. “It is causing panic and they all feel very threatened,” he adds.

The US giant’s impact is also indirectly affecting retail design groups, says the Echochamber spokesman. “Retailers are allowing manufacturing brands to have more influence on store design. Therefore manufacturers are touching consumers far more easily than they were previously,” he says, citing Boots the Chemists at Bluewater as an example of this “role reversal”.

“Design will have to get a lot cleverer in getting the messages across. It will be a lot harder as budgets are going down because retailers are squeezing the margins on everything to cope with the likes of Wal-Mart,” he says.

Asda’s Rutherford plays down the possible effects of this latest development in the supermarket sector saying, “it may be effected in terms of the level of price competition”.

But the Echochamber spokes-man is more wary of the likely implications in the near future. “It is not the end, but it’s a new take on retail design. In two years’ time, the shake-up will really begin to happen.”