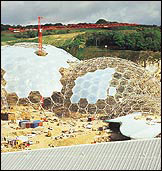 Buckminster Fuller’s legacy lives on in a worked-out clay pit near St. Austell in Cornwall. The Eden Project is already successful, a year before its great ‘biomes’ opens to the public. People flock there, paying £3 a time, just to see the great glasshouses being built. Although ‘glasshouse’ is a misnomer. Glass is heavy, often unstable stuff which cuts out a lot of daylight. Eden is clad instead in inflated triple-layer ‘pillows’ of very light ETFE foil. The hexagonal geodesic structure is very delicate. The intersecting domes appear to sit as lightly on the ground as soap bubbles.

It looks like a lost world, a moon city. It is absolutely true to Fuller’s principles, and uses (and refines) the technology he developed. Appropriately, it is designed by two of Fuller’s most ardent admirers – architect Nick Grimshaw and structural engineer Tony Hunt who discussed projects with Fuller, tested their ideas against his. The process has continued posthumously. At first, Grimshaw and Hunt devised a completely different structural solution, derived from their earlier Waterloo International Terminal. They envisaged long, curving steel trusses as the bones of the glasshouses.

But it quickly became clear that such a system was too inflexible for the rough terrain. You would have to shape the land to fit the building, which was scarcely the eco-message that Eden had in mind. But then the two long-time colleagues and innovators remembered Fuller. They experimented with geodesic domes. They found that the geodesic structure can easily be adapted to fit lumpy, sloping ground. Moreover, the geometry of the system means that any point of intersection between domes automatically creates a perfect vertical arch. And finally, it needs much less material to enclose the same amount of space. So much less that the scaffolding erected to build the domes weighed a lot more than the domes themselves.

Eden thus does at least two things that Fuller started so long ago. First, the structure is as lean as possible. Second, Eden’s message – the fundamental importance of the plant world to the survival of other life on earth – fits in with Bucky’s strictures about Spaceship Earth, not to mention his other phrases that have passed into common usage, such as ‘think global, act local’. At Eden, for instance, you do not just get the hi-tech look. Grimshaw’s visitor centre overlooking the biomes seems very modern, with its column-free, scimitar-shaped lightweight roof. Yet its walls are made of rammed earth from the site – a free material with no transport or embodied energy costs.

But beyond all the worthy stuff, we have to remember that Fuller was a showman and an optimist. The things he designed or imagined were never boring. They were extraordinary, exciting. When you go to see the Eden project, and catch your first glimpse of the cluster of iridescent domes rising above the green fields of Cornwall, you realise the magnitude of what Grimshaw and Hunt have managed to achieve: they stimulate a sense of wonder bordering on awe. And both men would admit that they would not have been able to do it without the ghost of Bucky looking over their shoulders. n

The Eden Project features in Equilibrium: The Work of Nicholas Grimshaw & Partners, by Hugh Pearman. It is published by Phaidon, price £45.