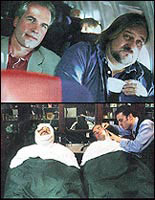 Not for the first time has the Design Council been instrumental in promoting the product design practice Seymour Powell on primetime TV, the current series, Better by Design (Review, DW 14 July), being a joint venture between Channel 4 and the Design Council.

Since the UK is not short of product design consultancies with excellent creative track records, it would be extremely interesting to learn what type of selection process was used by the Design Council to single out Seymour Powell, as it could be argued that public money is being spent on TV advertising for one favoured design group.

Surely a more balanced view of the design process would have been achieved had the six projects chosen for the series been divided among six different groups such as Jones Garrard, Priestman Goode, Ideo and so on.

And finally, Channel 4 would do well to spend a little more of its time on research. The narrator of the first of the series, which was broadcast on 18 July, was quite wrong when she stated that the seat recline system has never been used on a seat before. Look no further than the child car seats in high street store Halfords, which have used the same system for years.