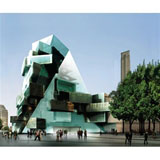 The Phase One Report received by Chancellor Gordon Brown last week gives the fullest insight since the Cox Review as to what a design village and national centre for design and innovation would look like, though £2m will be required to finance the next phase of development. The London Development Agency audit sets out the necessary steps for the project, codenamed The Bridge, to move forward. According to the report, The Bridge would be a ‘multi-purpose complex of buildings and open spaces in central London’ situated ‘within walking distance’ of one another. Its aim would be to integrate design and innovation activity for Britain’s businesses, universities, design profession and the general public, and would ‘involve… the key component [design] organisations’. It would have international reach and would be branded at a later date, possibly in conjunction with a commercial partner.

Sites at King’s Cross, South Kensington and Southwark have been identified for the scheme involving a range of partner organisations. Which ones are selected is likely to hinge on where the finance for the venture comes from.

The Southwark site, destined to become home for the new Design Museum, is the development area around Tate Modern, which yesterday received £7m of funding for a 23 000m2 extension by Herzog & de Meuron from the LDA (pictured). It would be the most public-facing of the three sites, but is likely to exclude key academic institutions based north of the river.

A second site at the King’s Cross-Euston regeneration area would look to be co-located with the University of the Arts London, via new premises planned for the innovation centre of the Central St Martins College of Art and Design, plus the London College of Fashion.

A third possible location for The Bridge, at South Kensington, would base the site around the Royal College of Art and Imperial College, close to the Victoria & Albert Museum and the Science Museum.

A Design Museum spokeswoman confirms that the Southwark scheme remains its own preferred location.

Next steps towards a national design centre:

• Full feasibility study to be undertaken by the LDA

• Up to 15 staff to drive the project

• Space for about ten design studios

• Incubator space for about 50 businesses

The industry’s future looks bright, but let’s hear your ideas