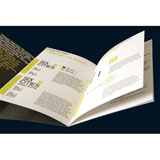 The long-anticipated Six Cities Design Festival, which is launching next year to promote Scottish design, has unveiled its brand identity, designed by Glasgow consultancy D8.

The identity will roll out across the Â£3m festival’s body of marketing collateral, including all of the events and projects being staged by each of the six cities. The three-week event is due to take place next summer in Glasgow, Edinburgh, Aberdeen, Dundee, Stirling and Inverness. D8 was appointed to create an identity for the festival in March following a seven-way pitch.

The identity has been designed to be as flexible as possible, says Tracey Kelly, chief executive at D8. The logo includes vertical bars, which are designed to be reminiscent of a collection of buildings on a city skyline.

Three of the bars are printed in grey and are meant to represent the letter ‘i’ in the text ‘Six Cities.’ The remaining three are printed in one of six colourways, with each colour representing a different city.

A further seventh colour band has been included, which will be used to represent the overall festival. The colour bar device can be manipulated and used as a container to frame additional text and straplines when individual promotional campaigns are being devised by each of the six cities.

‘The identity had to sit with lots of different imagery. We didn’t want to create something too elaborate and the intention was to have a strong identity that would stay with the festival for a long time,’ says D8 senior designer Keith Dodds, who has been working on the project.

To support the branding material, D8 is also designing a separate website for the Six Cities Design Festival, which will launch in September.

The festival is funded by the Scottish Executive and is being led by The Lighthouse, Scotland’s national architecture and design centre. Caroline Parkinson, executive director of nations and regions at Creative & Cultural Skills, was appointed as project director to help lead the scheme (DW 25 May).

Meanwhile, a replacement is still being recruited to replace Stuart MacDonald, who quit as founding director of The Lighthouse in May (DW 11 May). Interviews are expected to be conducted in late August, confirms a spokeswoman for The Lighthouse.

â€¢ Website, also by D8, to launch in September