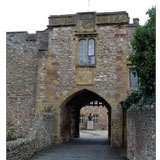 The Museum of Somerset, which is housed in the 12th century Taunton Castle, is to relaunch in 2010 with a £6.3m makeover.

Event Communications is creating a fresh brand identity and exhibition design for the museum, which is being reimagined as part of a long-term project to rejuvenate the Somerset region. The aim is to update the museum’s idiosyncratic space with a revised look and to re-establish the building as a significant landmark within the region.

Somerset County Council appointed Event Communications to the project in June following a six-way pitch. The museum houses a varied exhibition of archaeological items, natural history displays and a doll and toy collection.

Event Communications is now embarking on the initial design concept phase to reconfigure the space, according to Eithne Owens, interpreter and content developer at Event Communications. ‘The look of the museum was quite dated. The space was also very difficult to navigate around,’ she says.

Carrie Blogg, project manager at the Museum of Somerset, says the redesign will introduce more graphical, interactive and digital designs into the museum. ‘We want to optimise the space. The building is not very well known and we are seeking to re-establish it,’ she says.

Event Communications is working in collaboration with the museum’s in-house team and architect Feilden Clegg Bradley Architects, which is leading the overall redevelopment scheme.

If funding is granted, work will begin on-site at the museum at the end of 2008, and the museum will reopen to the public two years later. A stage one Heritage Lottery Fund application is being submitted in September.

Separately, Event Communications was appointed to lead the design strategy for the Guinness Storehouse over the next three years, as the museum looks to update its image, which was first created by Imagination almost six years ago (DW 6 July).