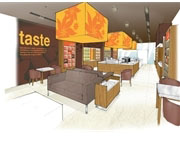 A Middle Eastern wholesaler of dried fruits plans to cut out the middle man by opening its own retail outlets. With one store set to open in Dubai, Clare Dowdy finds out about its future design strategies, including targeting the Western market

Dried fruits and dates play a major role in the Arabian diet. Bowls of both stand on kitchen tables across the Middle East, to be snacked on throughout the day by family and visitors alike.

These products are normally bought in bulk from markets and – increasingly – supermarkets. But one wholesaler that supplies these outlets, as well as European multiples such as Carrefour, has decided to get into the retail game itself.

Mani & Co, whose parent company is Iranian, has spotted an opportunity to open up a direct relationship with its customers. Like many brands that rely on the retailing methods of a third party, it wanted to develop its offer in its own environment. It’s happened in the Arab world before, with local gadget wholesaler Whizz opening stores.

Mani & Co’s idea was to position its fruit and nuts as luxury or gift items, and so brought in London-based consultancy Portland Design to create a suitable environment. The first outlet is opening this autumn in a Dubai shopping mall, with a second one to follow by the end of the year on a Tehran high street. ‘The target market is the aspiring, well-travelled middle classes,’ says Portland managing director Ibrahim Ibrahim. Dubai’s expat Indian and Arab blue collar workers, who also buy these items, go to co-ops and traditional markets. 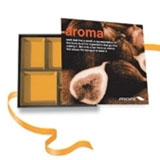 With its zoning and modern graphics, Portland’s solution store has more in common with a branded coffee chain than a traditional Middle Eastern store. But then, as Ibrahim points out, Mani & Co’s audience is familiar with Western design, and this is what lines Dubai’s myriad new shopping malls. ‘Even traditional shops selling Arabic products, such as perfumes and fabrics, are toning down their ornamentation,’ says Ibrahim, who has been working in the region for ten years.

Mani & Co’s space is divided into product categories, so everything to do with dates, for example, will be displayed together. That could include the full range of dried produce, preserves, cookbooks and smart presentation gift boxes.

These sort of gift packages are a major part of Middle Eastern culture. ‘It’s traditional to take food when you visit someone in the Arab world,’ says Ibrahim.

Meanwhile, items will be sold in three different sizes – Mini Mani sachets for children, Mani Snack packs and 320g bags dubbed Mani Chef. At the back of the store, there will be a café area. ‘It’s not the driver of footfall,’ explains Portland senior designer Michael Fern, ‘it’s an opportunity to experience the full Mani product offer. The ideal consumer will go and experience products by tasting them in pastries and cakes, juices and maybe ice creams.’ It is this combination of retail and refreshments around the dried fruit and nut sector that gives Mani & Co’s stores their unique selling point.

The strapline developed by Portland, ‘the essence of fruit’, will be used in window graphics. And while the first two outlets will open with Mani & Co’s existing packaging, it will be swapped to Portland’s new version if the formats are successful. 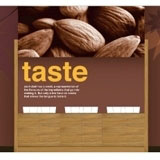 Success for Mani & Co does not just mean a few 100-150m2 stores in the Middle East. In the long term, the owners have their sights set on Europe. This would not be the first Middle Eastern retailer to come to the UK. Saudi-owned perfume empire Arabian Oud opened a shop on Oxford Street in 2002, and local telecoms retailer Axiom is planning a Portland-designed store in Knightsbridge.

Ibrahim speculates that Mani & Co ‘would go down brilliantly in London, but they would need to change the positioning from luxury to more of a health offer’ to cash in on the decline in popularity of chocolate and jams and the rise in sales of nuts and fruits. He points out that the UK high street has no fruit-and-nut-based retail experience. ‘What about pick and mix au naturel?’ he suggests.