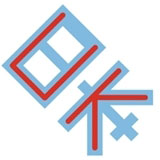 A year-long season of events celebrating creative collaborations between the UK and Japan is launching with a dual-language visual identity created by Johnson Banks.

Organised by the British Council and the British Embassy in Tokyo, UK-Japan 2008 will bring a series of exhibitions, performances and other events to Japan, highlighting collaborations between the two countries in the arts, science and creative industries.

Johnson Banks creative director Michael Johnson says he wanted to create an identity that reflects the connection between the UK and Japan in a graphic way. The result is a marque which uses a Japanese script called Kanji to form the letters UK within the word ‘nihonkoku’ – which translates as ‘land of the rising sun’. This incorporates both countries’ names within a single logotype.

‘A bilingual logo design is always difficult and the two languages are very different in their letterforms. We’ve had to manipulate the Kanji letterforms to achieve a truly bilingual result,’ says Johnson.

UK-Japan 2008 is timed to coincide with the 150th anniversary of the signing of the Anglo-Japanese Treaty of Amity and Commerce. Johnson says the programme will seek to showcase genuinely collaborative creative projects, rather than simply present UK designers to a Japanese audience.

Johnson Banks was appointed to the work by the British Embassy following Johnson’s trips to Japan to work on the identity for the Sendai Astronomical Observatory (DW 20 April).