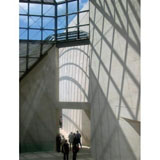 Last month, the doors opened at two major new museums in Paris and Luxembourg. Natasha Edwards evaluates their very different approaches to exhibition design, coming away impressed by one and confused by the other.

The new Musée du Quai Branly in Paris is a bit of a monster. It’s a colossal edifice on stilts that surprises with its deep colours, protruding boxes and angular baroque forms. A pet project of President Jacques Chirac, it is intended as a cultural bridge between Europe and the other four continents that form its subject matter.

Jean Nouvel describes it as ‘architecture constructed around a collection’, a megastructure comprising galleries, auditorium, library, shop, educational and restoration workshops. It’s a total design concept in which Ateliers Jean Nouvel was responsible not only for the architecture but also the furniture, signage, museography and lighting.

A circular drum or ‘silo’ rises the height of the building, around which a 180m ramp (criticised by disability groups) climbs, leading you to the permanent gallery, a huge open plateau without walls, its vibrant colours a shock after the white-and-glass entrance level.

Dividing the space is a 220m long Serpent, covered in beige calfskin, which borders a central corridor or ‘river’ – metaphors here are multiple and varied – that flows between the continents. ‘The collections are grouped by continent, but the resulting geography is a fictional map, the imaginary representation of an archipelago-like world,’ says Nouvel. The sculptural ‘furniture-object’ of the Serpent also provides seating areas and multimedia niches, containing small screens for documentary films, archive footage and photographs. The leather’s fragility, (it is glued on to the underlying steel structure in countless small pieces) and the difficulty of keeping it clean makes you wonder how long it will last.

Two dark red mezzanine balconies intended for small exhibitions protrude into the volume. Filtering out the light are brightly coloured trees and foliage screenprinted on the glass on one side, and an adjustable system of angled metal screens on the other.

Designed in collaboration with lighting consultant Georges Berne of Observatoire 1, the low lighting and shadow play are intended to create a theatrical aura and evoke the sacred and ritual role of many of the exhibits. The fleeting glimpses you get, however, only serve to distance the objects. Is it ‘poetic and disturbing’, as intended, or simply kitsch?

The signage is a problem. Most of this is contained on the Serpent, but the use of brown lettering on beige leather makes the explanatory texts hard enough to read in the French version, let alone in the reduced-size English and Spanish translations underneath. Barely visible chest-height signs point to the different continents, and there’s a similar difficulty in finding any exit signs. Despite colour coding (blue lino floors for the Americas, brick red for Oceania), it’s not always easy to work out where you are.

The most successful elements of the display are the metal boxes that jut out from the Seine façade, which function as shrine-like settings for selected works, such as masks from Ethiopia or gigantic, figurative, carved, wooden house beams and columns from the Pacific. For the numerous African masks and pre-Hispanic sculptures displayed in glass boxes, Nouvel refused to put labels beside each object, which has left long, confusing lists down the side – evidence of the conflict between aesthetic appreciation and pedagogy that lies at the heart of the project.

Design by IM Pei of Pei Cobb Freed and Partners

Known as Mudam, Musée d’Art Moderne Grand-Duc Jean could not be more different from Musée du Quai Branly. In many ways, the building design by IM Pei (one of three museums by him to open this year) is more old-fashioned, but it is far from the gallery white cube, with an arrow-shaped ground plan that is both legible and complex.

Built on the foundations of an 18th century fort, it seeks – just like Pei’s Louvre pyramid – a dialogue between past and present. Some of the architectural detailing is also reminiscent of that earlier project.

The gently scalloped ‘shed’ roofs, made of concrete and low emissivity glass, in the two principal first-floor galleries, have been conceived to provide natural lighting, while minimising shadows and reflections. In contrast, the 33m-high central atrium, which is both circulation zone and sculpture gallery with its steel and glass roof and stone-clad walls, is all about the play of shadows as the sun pours in from two angles. Within the galleries, the lighting design by Ove Arup & Partners and Fisher Marantz Stone uses an innovative system which allows low tension halogen projectors on the same track as linear fluorescent lights. Unlike Quai Branly, this design is about visibility, seeing through to the works in the museum and showcasing them – not dominating them. 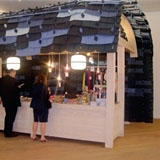 Despite the name, Mudam is very much a museum of contemporary rather than Modern art. If Nouvel’s approach could be described as megalomaniac, there is a generosity here, part of an approach to a collection-in-progress in which design collaboration forms an integral part. Behind a deliberate ambiguity between what is artwork, structure, shop or design object lies the Be the Artists’ Guest programme, which views the museum as a place conceived by artists and designers, constructing its different spaces and services, and creating its furniture and scenography.

For instance, Bert Theis has designed seating that can slot against gallery walls, slide together or stand alone in the centre of a room or outdoors, and Martin Szekely has created pared-back, white Corian blocks that serve as entry desk, bench and information counter in the lobby, as well as four cocooning, black leather sofas on the first-floor landing. The backs of these sofas incorporate speakers, diffusing a soundwork by DJ and ‘curator-at-large’ Frédéric Sanchez.

The shop and restaurant were designed by the Bouroullec brothers as autonomous structural elements within the museum, using a rough wooden frame and an interlocking thermo-moulded felt tile system developed for Kvadrat’s Stockholm showroom earlier this year. The shop is stocked with eclectic items, from limited edition artworks to antique Indian jewellery, kitsch vintage postcards, pottery and recycled lights.

‘We wanted to create the idea of a bazaar or market,’ explains Italian designer Maurizio Galante, who worked on the shop concept with trends forecaster Tal Lancman. Even the museum logo forms part of the project, developed by corporate identity consultancy Ott & Stein in collaboration with Oliver Peters, who has devised a special geometrical typeface inspired by Japanese script.