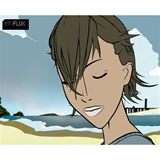 The interactive, community-based channel will deliver content via television, the Internet and mobile phones. Nexus has created a set of Japanese manga-style avatar characters which users can personalise to represent themselves in the on-line community.

The first stage of the channel launches at www.mtvflux.co.uk on 1 August, with the television platform to follow. The channel identity is designed in-house at MTV.