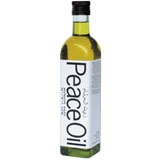 A design project for a soon-to-launch olive oil product, which is manufactured in Israel and produced to promote peace in the Middle East, has been stalled because of the escalating crisis between Israel and Lebanon.

Called Peace Oil, the product has been designed by Pearce Marchbank, founder of Studio Twenty, in his spare time. The first shipment of samples was due to be shipped from Haifa in Israel to the UK last week, but Marchbank says the war has made ‘shipping from the Israeli port impossible and alternative arrangements are being sought via a safer route’.

Peace Oil is an initiative of The Charities Advisory Trust, which encourages co-operation between communities through marketing products to bring economic prosperity to deprived regions. The extra-virgin olive oil is produced by an ethnically mixed group including Jews, Arabs, Druze and Bedouin, working together in the foothills of the Carmel mountains in Israel. The design features the words ‘Peace Oil’ in Hebrew and Arabic. The profits will be used to support peace and reconciliation throughout the region.

Peace Oil is due to hit supermarket shelves in the autumn, but Marchbank cannot confirm a set date yet.

‘It is very sad and ironic that this Peace Oil initiative, produced in collaboration by both Jews and Arabs, should be delayed by a war between Jews and Arabs. Yet all the people involved are still working co-operatively, in spite of the troubles,’ he adds.