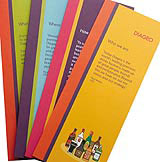 Ellipsis has created corporate brand guidelines for drinks company Diageo, which launch on 1 July with the aim of unifying overseas subsidiaries under the Diageo name.

The Diageo brand, created in 1997 by Wolff Olins after the merger of Guinness and GrandMetropolitan, has acted as an ‘umbrella name’ for business divisions in international markets. Identities of these subsidiaries will now be realigned under the Diageo marque, says a company spokeswoman.

The guidelines, which cover signage and stationery as well as identity issues, will also set standards for design work across Diageo’s business, says Ellipsis managing director Chris Hoskins. ‘They’ll be a key communications device, internally for staff and externally for design suppliers,’ he says.

The corporate logo has been retained, but more guidance given regarding colour palette, tone, style and photography to harmonise the Diageo look and feel across the board and strengthen the brand, he adds.

‘In particular, we’ve focused on the way they write and portray themselves. As a young company, with a fresh, modern style, it’s important Diageo uses the right terms and phrases,’ Hoskins says.

The consultancy was appointed in January without a pitch and designer Pauline Mosley led the project creatively.

Statement that starts the week off on positive note