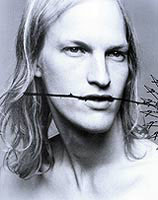 Dutch group Mevis en Van Deursen, Zurich-based MÃ¼ller & Hess, Walker Art Center’s Design Studio in Minneapolis and Paris group M/M have been selected because they enjoy the shared sensibility of having set up consistent design ‘systems’ for their work, according to curators Christian KÃ¼sters and Emily King.

With the exception of Walker Art Center, the case studies have been lifted from KÃ¼sters and King’s book Restart: New Systems in Graphic Design, published last year by Thames & Hudson.

In some cases, the groups have long-standing relationships with clients. M/M has collaborated with Japanese fashion designer Yohji Yamamoto for seven years, producing a collection of posters, catalogues and other graphics, on display, as systematically bizarre and beautiful as the collections themselves.

The legendary design studio at the Walker Art Center under design director Andrew Blauvelt, by contrast, has developed a coherent style for the diverse printed materials for Walker’s own events, from monthly calendars to exhibition catalogues. It is perhaps best known for its in-house Walker typeface, designed with Matthew Carter. The studio’s map of Walker’s permanent collection, featuring artists’ names and origins on a blank world, is a great piece of information design and an inspired choice.

The work of MÃ¼ller & Hess shows its stylised overprinting style, particularly in its self-published magazine Grenzwert. Trained in the Swiss typographic style, MÃ¼ller & Hess now defines its relationship with the Swiss graphic tradition as ‘love/hate’. Finally, Mevis en Van Deursen’s work on-show is an eclectic mix of book design for clients including the Artimo Foundation. The group is similar to MÃ¼ller & Hess in its approach to ‘letting its [design] systems roll’, says KÃ¼sters.

The work is displayed in the contemporary design gallery’s giant glass cases, which prove to be the exhibition’s downfall. More suited to showing off stuffed grizzly bears, they are fantastically inappropriate for showcasing 2D graphic design. The catalogues by Blauvelt’s studio and Mevis en Van Deursen’s books are difficult to see laid out flat at feet level, and a shoulder-height plateau shelf in each case is rendered useless. Even text enlarged on the glass fronts, such as quotes by the design groups, are difficult to read because of their height, line length and light reflection.

KÃ¼sters admits the cases are a hindrance. ‘They are not ideal, and we had to use lots of posters as examples of work. But they forced us to opt for a minimal look,’ he says. King agrees. ‘[The Design Museum] must get rid of them,’ she tells me. ‘They are an installation problem.’ To KÃ¼sters and King’s credit, some of the larger pieces, such as blown-up black and white pages lifted from Mevis en Van Deursen’s books, work well. And the pair have deliberately avoided contextualising the work too much, instead allowing visitors to draw their own conclusions.

Stunning Bouroullec-designed chairs are placed in front of each case, and a side table houses three iMacs, enabling people to access single Design Museum-produced Web pages on each group. But the information doesn’t add to that on display already and the computers are a waste of space.

The Design Museum needs to use its areas more beneficially. This type of show would have been better staged in a more intimate space that would also do better justice to the work itself, which is at times beautiful.

‘I’d buy that for a dollar’ opens 5 July