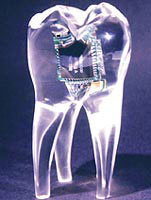 ‘He could eat an apple through a tennis racket with those teeth,’ footy pundit Ron Atkinson once said of buck-toothed World Cup striker Ronaldo.

The Brazilian would make an ideal model, then, for MIT Medialab designers James Auger and Jimmy Loizeau’s listening device, which is being shown as part of the Science Museum’s Future Product show from 21 June.

They have created a vibrating ‘tooth implant’ that can pick digital signals sent by computers or mobile phones and convert them into audiowaves that are transferred to the inner ear via ‘bone resonance’. Spooky, huh?

This for-your-ears-only gadget is sure to give James Bond fans something to chew on. But it may be premature for Ronaldo to hang up his boots and join the spy game. A Science Museum spokeswoman says, ‘It’s still a conceptual thing. It hasn’t been put into production and sold at Carphone Warehouse.’