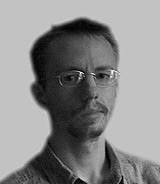 Alex Hulse is, not surprisingly, most eloquent on the subject of his double award-winning Web stream Cyber Syndrome. The Ravensbourne College of Design and Communication student, who graduates this summer from the moving image design course, fought off 2167 others to win British Design & Art Direction’s Student of the Year award and has also been named Art Directors Club of Europe European Student of the Year. So what’s all the fuss about?

The stream climaxes into a frenzy of balletic activity, which, in D&AD’s somewhat prudish words, represents ‘the consequences of the two communicating in cyberspace’.

As befits a student, Hulse is a touch less stuffy. ‘The end is a parallel with love-making,’ he explains. ‘The stream follows the way a conversation runs, and the way humour can bring the two people closer, particularly if they are on a date. And the music was a big inspiration.

‘I researched Internet chat rooms, and [noticed] how they can limit people’s communication. But, in fact, they are the opposite of two people held apart by a wire – they are about emotion and interaction. Communication is what the Internet is for.’

Students entering the streaming Web media category had to follow the open brief of creating a ‘single-minded idea’ for a [hypothetical] longer stream entitled Interactive. Arguably not one of the more instantly sexy categories, streaming Web media sits alongside photography, TV advertising, illustration and graphic design to name a few. But streaming is, according to Propaganda creative director Steve Dixon, who set the brief, the ‘next big thing in Internet broadcast’. It enables Web users to follow live events on-line.

It is the first year the category has appeared. D&AD college programme manager Anna Bailey says she was surprised at how many entries there were as it usually takes a while for tutors to get to grips with a relatively new subject.

She says the open brief helped attract entries. ‘Students felt they could let rip,’ she says. Hulse agrees. ‘It was great not to restrict myself. [The open brief] meant I could run away with my ideas,’ he says.

Anyone watching Cyber Syndrome can see the subtle comedy within, and Hulse cites humour as a key component of his work. The monologues of Ben Elton and Jack Dee inspire him ‘as you can relate to what they’re saying’. Hulse’s college dissertation is entitled ‘The impact of humour on advertising in television’ – hardly a new concept – and he says he entered the awards’ TV advertising category with a dream-sequence for Club 18-30, with the brief to ‘keep its reputation sizzling’, but was unsuccessful. Perhaps his emerging brand of humour works best on a more understated plane.

When pushed on who or what he admires in the design field, he names 3D animations such as Shrek and Aardman founder Nick Park’s work rather than individual heroes, who don’t trip lightly off Hulse’s tongue. But he says he is aware of the danger of students being ignorant of what is happening in the industry.

‘It is a good idea to get some work experience and skills on your CV, but it depends on the individual. For some, it is less relevant, but it is generally important to know at least what the market is like,’ he says. Hulse worked as a runner for a production company before starting Ravensbourne.

He says entering higher education without a single-minded career goal is no bad thing. ‘It is important to keep your options open, and document all your work, by building a showreel or portfolio,’ he adds.

Awards are vital to get students noticed, he says. ‘Everyone’s scared about the job situation. The industry’s growing and, as a result, people are becoming less brave. But there are now more channels and media, so students shouldn’t be [less brave], he adds.

Awards also allow others to judge your work outside the college environment, Hulse says. ‘Tutors have a world of experience, but they rarely criticise your work. Sometimes it’s good to have a different perspective from outside, even if it’s negative.’

Not all his college peers are as future-focused as he. ‘Around 40 per cent of us are ready to start work, but the rest will probably travel or continue their education,’ he says. Hulse is keen to follow his success with a good first job. And negative comments from the industry is one thing he hasn’t had to worry about just yet.

Statement that starts the week off on positive note