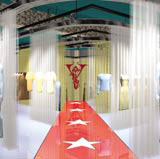 Italian fashion label Voyage has returned to London with a flagship store designed by Black Sheep, a year after its members-only shop closed on London’s Fulham Road.

Voyage was keen to work with a small consultancy to create a highly personal theatrical space, and held a four-way credentials pitch last November, says a spokesman for Mission, which managed the pitch.

The flamboyant two-floor Conduit Street store in London opened last Friday. It is a backlash against most ‘staid’ high street stores and looks slightly ‘unfinished’, says Black Sheep director Joanna Sampson, who worked on the project with co-directors Tim Mutton and Michael Delaney.

It features distressed walls, a turquoise ceiling and a plain limestone floor with red cut-out stars designed to mimic a red carpet, she says. Theatre is a core theme, represented by a pair of double-height velvet curtains on the ground floor to create drama and reflect Voyage’s eclectic collections, Sampson adds. A track snakes round the ground floor, on which curtains or clothing can be hung.

The basement, which stocks Voyage’s couture range, resembles a ‘starlet’s boudoir’, says Sampson. The changing rooms are designed to look like Winnebagos found on film locations, and are themed with children’s fairytales such as Snow White, and sit alongside a gentlemen’s bar. ‘The shop is a case of “expect the unexpected”,’ she explains.

Black Sheep worked closely with Voyage heads, siblings Tatum and Rocky Mazzilli, who are the children of the brand’s founders. Unlike its Fulham Road store, Conduit Street will not have a door or membership policy, says Sampson.