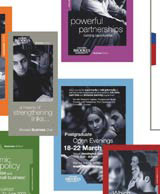 Universities used to be content doing little in the way of branding. Potential students based their choice of campus on its prestige, distance from home (the further the better) and size of the union bar, rather than brand values.

But competition between universities is hotting up. Colleges are chasing students for places as the sector rapidly expands. Student debt is a huge issue and students, now brand-savvy consumers, are being more choosy about where to invest their tuition fees. They’re used to being sold to.

As a result, branding is assuming greater importance. The past year has seen a slew of universities, many of them former polytechnics, re-evaluate their brand identities. The University of Sussex is working with Blast and Circus to evolve its identity to reflect major changes in its schools structure (DW 20 March), and Middlesex University, a former polytechnic, is now implementing the visual elements of a major overhaul of its brand last year by Precedent (DW 26 September 2002).

Middlesex director of communications Marie Owens says universities are starting to realise they are ‘a business like any other’.

‘Universities must communicate better to their audiences to win business,’ she says. ‘If we didn’t make money or attract enough students, we wouldn’t exist. We decided to take a proper look at what we offer, not just slap on a new logo.’

Bryan Brown, director at Marketplace, which has redesigned the identity for Oxford Brookes University (DW 6 February), agrees education is increasingly ‘subject to the same market forces as any other sector’.

And, he points out, ‘it’s often the younger entrants to the market, in this instance new universities, that think more keenly about how they’re doing business.’

Universities have a vast audience, from wealthy international students to those on lower incomes, which makes it difficult to create one brand that fits all, says Catherine Baldwin, head of student recruitment at the School of Oriental and African Studies in London, which is evaluating its brand (see News, page 4).

Some are ‘recruiting universities’, actively seeking students, where others like Oxford have the luxury of ‘selecting’, and this effects the message too, she says.

For ‘recruiting universities’, differentiation is key, but it can be difficult. After all, universities offer the same product – degree courses. ‘We’re like banks and building societies, which all offer accounts. As in that sector, service is becoming more important,’ explains Owens.

Owens argues it is possible to find areas of differentiation. Middlesex, she says, has a global outlook with a huge number of international students, an aspect that Precedent was briefed to communicate through marketing materials, signage and an identity.

Jim Bodoh, who, as director of Citigate Lloyd Northover, has worked on university branding projects including City University in London, Queens University in Belfast and, most recently, Wales College of Medicine, agrees.

‘The Government is pushing universities to develop distinctive missions and it can be easier for younger universities to achieve that,’ he says. ‘Goldsmiths College, for example, is strong in the creative arts. And City University has developed a strong business niche.’

Red-brick civic universities like Manchester and Birmingham, compared against either the aspirational spires of Oxbridge or the young upstarts, have the hardest job of differentiating themselves, says Bodoh.

‘Large civic institutions need to set themselves out from the crowd. They have such a broad spread of courses that it’s difficult for them to play on a particular strength,’ he says. ‘For designers, that’s a tough assignment.’

With the 1960s red-brick universities, naming was easy; you just used the city name. With newer universities, it can be more of a problem. When Oxford Brookes University, a former polytechnic, changed its name from Oxford Polytechnic ten years ago, also created by Marketplace, it was essential to choose a ‘proper’ name, says Brown.

‘We chose a distinctive name to help it stand out; John Brookes founded the university,’ he says, likening Oxford Brookes to universities such as John Moores University in Liverpool and the De Montfort chain in Leicester, Milton Keynes and Bedford, both named after founders.

Bodoh thinks universities in the past rarely looked at their ‘brands’ in an holistic way. ‘Former polytechnics in particular just badged themselves when they changed to universities, but didn’t consider the wider brand values,’ he says.

Design colleges, by contrast, have always been more sensitive to branding and design issues because of the nature of the people they are pitching to, says Owen & Avery creative partner Marc Avery, who has worked with Ravensbourne College of Design and Communication on its prospectus.

Smaller institutions obviously have to work harder. But branding and naming work is emerging at more traditional universities, albeit for different reasons. Encouraged by the Government to make the most of public funding, they are looking to merge where viable.

It was announced last week that Cardiff University is merging with Wales College of Medicine. A proposed merger between Imperial College and University College London last November, which could have created a ‘super-university’ and started a UK Ivy League, fell through. But one of a similar magnitude, Manchester University and the University of Manchester Institute of Science and Technology, was agreed earlier this month (see News, page 4).

‘In the past five years, universities have realised they are brands and are paying more attention to their marketing material, open days and courses. For example, we have been addressing the perceptions in the south east of Manchester, traditionally seen as a grimy, northern industrial city,’ says Manchester University head of public relations Alan Ferns.

Across the higher education spectrum, universities are seeking to position their offer and brand clearly. The challenge for designers lies in creating contemporary brands that appeal to a diverse but savvy youth audience, yet reinforce the often rich heritage of institutions and the cachet of higher education.