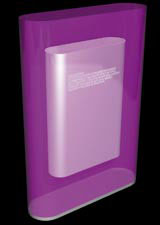 To identify buildings on a smaller scale, Imagination set out designs for etched or debossed metal plates. The etched area can be infilled with enamelled paints with the relevant college name highlighted in the college’s brand colour. The modern feel of these signs is designed to counter the traditional typography within it.

However, for more modern buildings such as the glass-fronted London College of Fashion, this approach is not appropriate. Instead, Imagination suggested vinyl graphics applied directly on to glass as a cost-effective alternative to etching.

Totem signs create visual impact at street level and inside the building foyers. Materials vary according to application, but the main external totem will be reinforced concrete with the logotype etched on to a metal plate. Inside the buildings, the designer suggested the use of solid resin, which can be internally illuminated to reflect college colours.

Although new buildings will adopt the new branding, mass implementation of the sign concepts is unlikely any time soon given the possibility of a name change if the organisation attains university status.

‘Quite rightly it is holding off with its investment,’ says Imagination design director Guy Marshall. He says Imagination’s concept work will not be wasted, but is instead a ‘step on the journey’ towards a final implementation of the new identity and name.

It’s time to come together to make the festival work