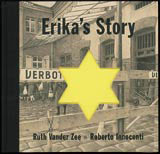 Born in 1940, Innocenti’s own childhood was overshadowed by the Second World War and its aftermath. Despite being an intensely artistic child, he was denied the opportunity to attend art school because of financial constraints. But the fact that he is entirely self-taught makes his work all the more interesting and original.

As a young man he worked briefly in animation and as a graphic artist in product and newspaper design before teaming up with the American illustrator John Alcorn, who also lived in Florence. Through Alcorn he met the publisher Etienne Delessert, who invited him to illustrate a new edition of Cinderella. This led to a series of contemporary ‘reinventions’ of classics such as Pinocchio, A Christmas Carol, and Ian McEwan’s retelling of Rose Blanche.

Now internationally known and acclaimed, Innocenti is better placed than ever to plough his own furrow, choosing increasingly oblique subjects – the Holocaust, the loss of imagination – to work on with writer collaborators.

‘I proposed a book without monsters, wizards, gods, wars or dragons – in short, without special effects,’ he says of The Last Resort, ‘the story is a fine thread, almost non-existent, it is more concerned with personalities. My aim is to awaken, rather than to satisfy curiosity.’

When he was first asked to illustrate Erika’s Story, Innocenti thought he would approach it like a fairy tale, in an unreal way. In the event, he went in the opposite direction and made the pictures as authentic as possible, but with one significant omission.

‘There is not one adult face in the book. I took away the faces of fear, of impotence, of horror. Whether out of pity or respect I don’t know. I thought I would leave the story naked, and not touch the emotional chords too bluntly. I don’t want to put messages in my books. We live in an era of proclamations. Erika’s Story finishes not with an answer, but with a question: Why? and that is a question all inquisitive children ask.’

With someone of Innocenti’s distinction, you always assume they are recognised and revered on their home ground, but he says illustrators are regarded as the Cinderellas of the visual arts in Italy.

‘We are decorators for the printed page or failed artists,’ he goes on. ‘We are expected to follow the rules of a moribund market controlled by philistines. We can only invest in quality and hope that our public, our readership, will respond to and appreciate that quality.’

The startling quality and originality of Innocenti’s work on The Last Resort and Erika’s Story shines out, even if the readership they are aimed at is sometimes hard to determine.