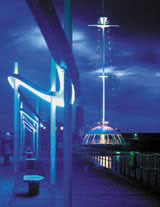 Forty projects that received National Lottery funding via the Millennium Commission, in the run-up to the year 2000, are being showcased in an exhibition at Tate Modern next month. Designed by Shelton Fleming, Out of Time features schemes including Nicholas Grimshaw’s Eden Project in Cornwall, The Deep by Terry Farrell in Hull and BDP’s revamp of Whitehaven harbour (pictured). Many of the displays are mounted on inflatable walls created by Inflate, while exhibition graphics are by McKenzie Clarke. Out of Time runs 1-19 December at Tate Modern, London, SE1.