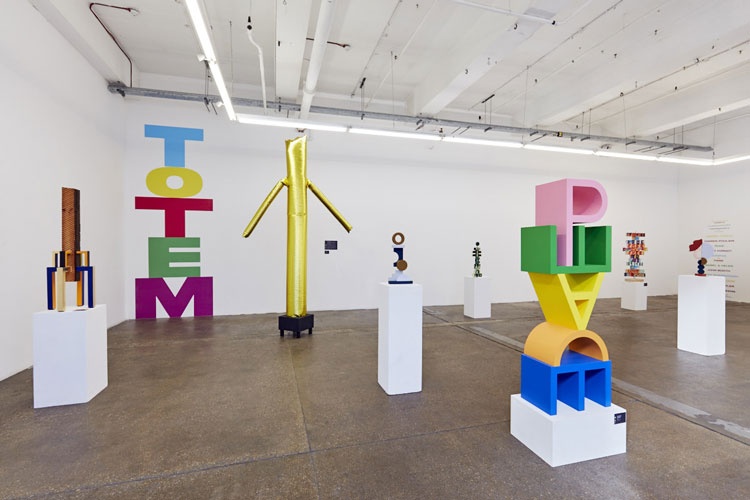 A group of designers, makers and artists including Morag Myerscough and Emily Forgot have created a series of colourful totem poles in aid of human rights charity Amnesty International.

Totem has been conceived by print shop They Made This, which has curated an exhibition of the creations alongside Jelly London’s head of illustration Nicki Field.

While traditionally totem poles have been created by Native Americans and are made from engraved tree trunks, the creatives involved in the Totem project have incorporated materials as varied as plastics used in emergency blankets and ceramic.

What unites the contributors’ work is the “hopefulness” and “positivity” that they bring to the project, says They Made This founder Aine Donovan, with the aim of emulating the work Amnesty International does.

On display at Amnesty International

Highlights include Bompas & Parr’s “Waving not Drowning” inflatable tube man (also known as a skydancer), which is made from gold mylar – the metallic plastic sheets used to make emergency blankets.

Meanwhile, Morag Myerscough has applied her trademark multi-coloured, graphic style to a group of hand-painted circle and start shapes, and illustrator Emily Forgot has a created a series of three, geometric totems featuring lips and an eye.

The totems are on display as part of a touring exhibition at Amnesty International’s London headquarters until 11 December 2017, which will then move to Gallery 46 in Whitechapel, East London on 14 December.

An online raffle of the artworks costing £5 per entry will be drawn on 20 December 2017, with all money going to Amnesty International.

For more information, visit the They Made This site.