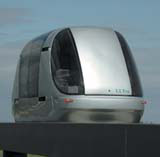 The British Airports Authority is to pilot a new type of public transport, designed by Advanced Transport Systems, at London’s Heathrow airport in 2008.

ATS has created a transit system featuring driverless pods that travel at up to 26mph along a concrete track, at an optimum interval of three seconds apart.

Powered by battery-operated electric engines, the four-seater pods will link passengers from the car park to either Terminal 1 or Terminal 5 – a decision on the exact route has yet to be finalised. The two-mile journey should take less than three minutes.

Passengers enter their destination using touch screens and computers deliver the pod to the departure and arrival stations in non-stop journeys. Stations are effectively lay-bys, which ensures that a single delay does not interrupt the journeys of other pods.

According to ATS non-executive director Nigel Clarke, the system is cost-effective to introduce and uses modern technology to reduce waiting times and improve comfort.

‘There are no power requirements as the cars are battery-operated and load-bearing needs are very light, similar to a footbridge, so the system can be installed quickly and cost effectively,’ he adds.

The design of the pods can be varied from project to project, Clarke says, to meet individual requirements – such as luggage needs at airports.

If the 12-month pilot scheme is successful, a roll out across Heathrow and other BAA-operated airports is likely.