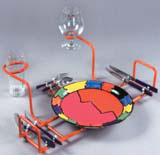 The profile of design in schools received a boost this week, with the opening of an exhibition showcasing a pan-European collaboration of designers and young people at The Lighthouse in Glasgow.

Designers involved are now calling for the design industry to make use of the creativity available in schools more effectively.

More than 4000 children across the five countries were involved in Fantasy Design workshops, from which 200 submissions were selected for appraisal by an international panel of judges, who then chose the final 60 products.

Although the project was created to promote creativity and design within schools, designers involved believe the industry could benefit from working more closely with children.

According to One Foot Taller designer Katty Barac, who was on the judging panel, the design industry should consider using children ‘as an asset in product development programmes’.

‘That children are able to grasp how to develop products for a more enjoyable way of living and enjoyment, is something that is so often lost in a competitive world,’ she says. ‘When faced with their collective inventiveness, it struck us how little creativity adults often show in comparison.’

The Lighthouse education manager, Lesley Riddell, agrees with Barac, adding, ‘You don’t have to be able to draw to be a designer – it’s all about ideas, invention and having fun. Children aren’t bound by limitations or caught up in the debate over form and function, and can really pull out great ideas. People think design in education isn’t about viable products or an idea you can push forward. This shows it’s not the case.’

Seven Scottish designs were among the 60 shortlisted products, including the Disgusting Food Demolisher – disguised as a schoolbag with a plastic tube to vacuum up food, this bag eats unwanted dinners – designed by 15-year-olds Cara Hoslgrove and Sara Kelly, and interpreted by jewellery designer Suilven Plazalska.

Other ideas include the Dyson Warrier – a remote control car that sprays Shake ‘n’ Vac in front of it as it vacuums – designed by 13-year-old David Currie and interpreted by John Miller; and the Changing Kettle, which changes colour depending on the temperature of the water inside it, designed by Carol Ann MacTaggart and One Foot Taller.

Other shortlisted products, from across Europe, include the Walking Dinner Tray (pictured), which provides individual compartments for food and drink, preventing spillage; and a doorbell that allows a visitor to leave a message if the occupants are out.

Fantasy Design is co-ordinated by Design Museum of Helsinki in Finland, in collaboration with The Lighthouse, the Design Museum Gent in Belgium, Norsk Form in Norway and Hindholm Socialpedagogiske Seminarium in Denmark.

In Finland, local designers, including Pentagon Design managing director Arni Aromaa and tool manufacturer Fiskars, were involved in the project, which also tied in to the country’s first ‘Year of Design’.

• Children given an open brief on subjects including Get Dressed, Sit Down, Carrying Things and Cooking