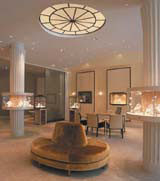 Buying a piece of jewellery – from seeing the coveted item winking out at you from beneath glass cabinets, to the salesperson offering you a closer inspection – has traditionally been a far more thrilling experience than the retail space itself.

As the mindset for jewellery shopping has evolved over the past 20 years, from an emotional to a fashion-led purchase, the retail store environments have remained stuck largely in the past, dusty with the legacy of a Victorian heritage. They are based on blank canvas interiors, unimaginative displays and traditional modes of cabinet counter-selling.

Gradually, however, external design consultancies are upping the ante, drafted in for the first time, to work on visual merchandising, retail and brand projects, as retailers seek to integrate a more contemporary aesthetic into store environments. They are also attempting to catch a broadening market, engaging men as well as women.

Given that the world’s leading jewellery and diamond suppliers are hundreds of years old, change is slow to come – but the first signs of evolution are beginning to be seen on the high street.

Ortak, the official jewellery supplier to the Baftas, is currently working with Scottish-based interiors and graphics consultancy 442 Design to overhaul its chain of stores and create new concepts, in a bid to lure a younger customer. ‘Empowered women are moving away from an emotional purchase to a self purchase’, says Yvonne Carr, retail director at Ortak. ‘They want to buy items for fashion reasons and will shop alone, without a partner. Retail stores are changing from the austere counter environment, to encourage customers to browse without intimidation or pressure. We want design value in a lovely retail environment,’ she explains.

The Orkney-based company specialises in Celtic-inspired jewellery items and has 11 stores across the UK. It aims to open and revamp one store each year. 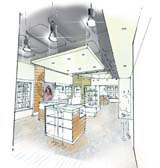 This month, Ortak relaunches its flagship store in Aberdeen for the first time in 12 years. It has introduced a more contemporary interior environment, featuring revised graphics, a new lighting scheme and brighter colour palettes, all designed to be consistent with its brand positioning, ‘nature refined.’

‘The store was redesigned to reflect a more contemporary range and a younger customer. There is a growing trend for modernity in jewellery stores, however, there is a fine line between being overtly modern and too traditional,’ says Kevin Rettie, creative director at 442 Design.

Starr Jewellery, the upmarket jewellery shop in London’s Burlington Arcade, is also relaunching this month, with a revised brand and interior concept developed by Camouflage. The consultancy was appointed in June and has attempted to evolve traditional jewellery store formats, which director Alex Keane refers to as ‘prehistoric.’

Keane believes that displaying items ‘racked and lined up to create a complex cacophony of stones and metals all shining at you’ undermines the precious nature of jewellery itself. It devalues the product so that ‘a goldie looking’ type chain will retail in the same way, and sit alongside, a £10 000 product.’ Instead, he thinks jewellery companies should look at product differentiation and experiment with visual merchandising to create a hierarchy and points of reference.

Camouflage has designed a system across one wall of the shop to show off Starr’s products. The design is based on the facets of diamonds, and each ‘cut’ side features a panel that can be opened to reveal a jewellery product. It has also created a set of ‘messages and images’ that will brand windows and suggest a narrative.

‘There is a lot of window shopping, where you may look at 1000 different pieces, but you never go in and have a dialogue. The challenge is to entice the consumer in,’ adds Keane.

Starr is planning to open a store in Italy and the retail concept will be rolled out accordingly.

As designers continue to work with jewellery companies, the retail environments are likely to become more bespoke, glamorous and exciting. ‘The bar has been lifted. To compete, you have to do that bit more; stores must be as beautiful as the jewellery itself, like a piece of artwork,’ says Lauren Henderson, director of brand analytics at FutureBrand.