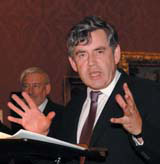 Plans to build a new central London design centre, backed by the London Development Agency and the Design Council, have been put to Chancellor Gordon Brown, in a bid to harness the economic potential of the capital’s burgeoning design industry ahead of the 2012 Olympic Games.

If it is given the green light, the London Design and Innovation Centre could become the focus for design activity in the UK, and would probably supersede the new design centre planned for Gateshead as the country’s national centre for design.

Site proposals currently being considered include dovetailing the proposed London design centre with plans to build a 4000-seat international convention centre for the city, put forward by the LDA last week. An independent commission has advised that such a venue in London would earn the capital £400m a year and create 5500 jobs. It would cost between £250-300m, according to the Mayor’s office, and might be located at a disused sorting office, off New Oxford Street, in the heart of London’s West End. The LDA is seeking a site based in the ‘city’s central tourist district’.

Sir George Cox has written to Brown with details of the proposed scheme, and the Design Council chairman is expected to make a public announcement about the plans ahead of the Chancellor’s Pre-Budget statement in the coming weeks. Brown is expected to use the speech to air any recommendations from the Cox Review that are deemed to have potential for business growth.

Any proposal for a national design centre in London is not likely to be welcomed by all sides. The Design Museum, based in Shad Thames, is understood to have hotly opposed a similar idea drawn up for Battersea Power Station, and other creative centres, such as Glasgow and Newcastle, would also seek to vie for the national design centre mantle.

16 March – the Chancellor sets up the Cox Review to advise on harnessing the power of creative businesses. Sir George Cox will later advise Brown of the need for a national design centre based in London

21 October – LDA outlines recommendations for an international convention centre in London to generate £400m a year, which is tipped as a site for the UK Design and Innovation Centre