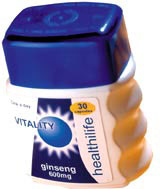 The first example of the revamped packaging for Primacy Healthcare’s vitamin range Healthilife, designed by The Design Group, will be on-shelf at the end of October ahead of the ‘official’ launch of the full range in January.

The Design Group won the contract at the beginning of July, after a creative pitch against three undisclosed rivals.

The Design Group was asked to create livery for at least 20 products in six new categories, ranging from ‘women’s health’ to ‘joints and bones’, one product of which will be the first to go on-shelf.

The brief was to make the design contemporary and more effective in a crowded marketplace. According to Mintel, sales of dietary supplements were worth £365m in the UK in 2000. Healthilife has claimed sales of £3m a year.

According to Primacy Healthcare marketing director Debbie Kellett, ‘The packaging needed to say what and who the product was for. The clear and easy to understand product names are central to the rebranding.’

The Design Group dropped the flower logo and used a sun image as the central focus, running the logo vertically along the side of the pack. The colour coding extends to cap lids to help customers distinguish between different categories.

A spokeswoman for The Design Group says, ‘The flower design seemed old fashioned. The sun image was seen as a simple and strong icon to pull the design together.’