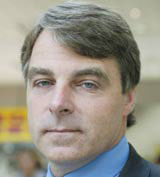 ‘The logo has gone back to its roots, it is a more adult version, a lifestyle brand that remains specialist,’ says John Rushworth, a partner at Pentagram. The consultancy is also developing brand guidelines to accompany the refreshed marque (see page 3).

The identity is just about to ‘flood across the business’ branding packaging, products, and services, including Mothercare Direct, which comprises the direct mail order catalogue and the shopping and information website. It is currently being trialled on shop facias across six North London stores and could potentially be rolled out across the entire Mothercare portfolio, including 241 stores in the UK.

Lewis Moberly has created Mothercare’s first identity for its maternity wear range. The collection will be branded Moda and launches this autumn. The identity will run across fixturing, coat hangers, bags and neck labels. Lewis Moberly is also developing point-of-sale items to brand the Moda maternity areas where the collection will be located. The identity will be trialled in up to ten stores at the end of the summer and rolled out accordingly.

‘This identity has more of a fashion-forward, aspirational feel to it. The emphasis is that you can be pregnant and fashionable at the same time,’ says a spokeswoman for Mothercare.

NB Studio, appointed last month, is also working on internal communications for Mothercare, looking at signage, corporate messaging, in-store promotional campaigns and tone of voice. The work is likely to bring some personality back to the stores, but Mothercare is remaining elusive about specific details.

Meanwhile, Together Design, appointed a month ago, is creating some design material to promote Mothercare’s account card.

‘We thought it was an appropriate time to look at how we communicate the store card to our customers,’ confirms a spokeswoman.

The loyalty card may also be relaunched and developed as an idea, but Mothercare declined to comment on this.

Fitch London is also drawing up new store concept ideas for Mothercare’s out-of-town superstores, Mothercare World. This follows the current refurbishment programme being carried out by Mothercare across its portfolio of high street stores.

‘We are in the development phase and not in a position to announce the look and feel of the stores yet,’ says the Mothercare spokeswoman.

‘Design has always been very important and a priority for Mothercare, it is an integral part of the business. We will continue to work with consultancies on a project by project basis,’ she adds.

If Mothercare is as ambitious with its design strategy as it is with its business plan, the cumulative effect of these projects – and future initiatives that are in the pipeline – could be simply stunning.

Most recent trading results suggest a sales revival is putting Mothercare back on track. The company is well on its way to reclaiming some of its former glory and design is being employed as a key weapon.

â€¢ In 1972, Mothercare became a public company. Ten years later it merged with Terence Conran’s Habitat chain to form Habitat Mothercare which in 1986, itself merged with British Home Stores to form Storehouse.

â€¢ In 1992, Storehouse rationalised by selling Habitat to the Stitching Ingka Foundation, leaving it to focus on its two core brands, BHS and Mothercare.

â€¢ In May 2000, Mothercare became an independent entity once again following its demerger from BHS.

Ben Gordon joined as chief executive officer in December 2002 and has put together a programme of strategic priorities in five key areas that comprise: product and proposition, sourcing, customer interface and infrastructure. Gordon was previously managing director at The Walt Disney Company.