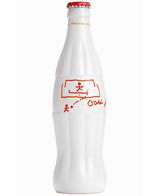 Coca-Cola has asked celebrities such as fashion designer Manolo Blahnik and footballer Wayne Rooney (Rooney’s effort pictured) to design a Coca-Cola bottle along the theme of ‘What brings yuo sunshine?’

They have been asked to draw their ideas on a plain white glass bottle. Coca-Cola has pledged money to the Terence Higgins Trust for each bottle contributed. The designs go on sale at Harvey Nichols in June.