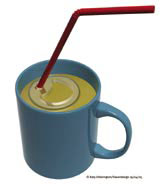 I felt great empathy when I read Private View (DW 24 March). This was shortly followed by the excitement of David Bernstein’s challenge at the end. Why, indeed, has something as simple as being able to drink a cup of tea without risking third degree burns never been considered for people who have to rely on drinking through straws? Needless to say it got me thinking, and after a considerable amount of head scratching and chewing the end of my pencil I believe I might have found a solution!

Often the straightforward methods are the best – why over-complicate things. It’s a simple problem: how can I make a straw draw liquid from the same place as my lips would sip from normally? Solution: float the straw on the surface of the drink and angle it so that it takes the liquid from the edge.

From that Sippa was born. It’s a simple device that uses normal straws, can be used in any cup, is hygienic, and cheap to produce. Another important factor was

discretion, there’s nothing worse than feeling as if there’s a neon sign over your head saying, ‘Look! I’m using something special’, as is the case for many products created for the disabled. I know, I use them and they make me cringe!

With a device like Sippa, control is given back to the user, they can sip from the coolest area just like people who don’t use straws. I’ve made a prototype, now it’s time to put it to the test!