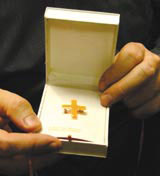 Fireworks, cash incentives, bank holidays and thank you cards are just some of the ideas that won prizes in the Voting by Design category of the Royal Society for the Arts Design Direction Awards 2005.

The student winners of the Voting by Design category, which takes an electioneering theme, were announced by the RSA in order to coincide with the acceleration of party campaigning last week.

The awards are held annually and consist of 15 categories, which include Safety and Security in Schools, Postage Stamps, and Design for Healthy Eating.

The brief was to create a new attitude towards the voting experience that will be more inclusive and relevant to society today. Voting by Design is a category that was introduced last year and is supported by political publisher Dod’s Parliamentary Communications, which provides contact and biographical information to the Government and Civil Service. Robin Hutchinson, managing director of Dod’s, is chair of the judging panel. The two other judges are Michael Johnson, founder of design consultancy Johnson Banks and Professor Tim Molloy, head of strategic design at the Science Museum.

According to Ann Crawley, design programme manager at the RSA, design could play a valuable role in changing the perceptions of reluctant voters. ‘The Design Directions scheme overall is seeking to focus more and more on projects that address issues within a broad social context. I think design could usefully contribute to improving many user aspects of the [voting] process,’ she explains.

Stephen Shaw, studying graphic design at Lincoln University, has won the award for his Citizen’s Day concept, which involves each constituency holding a day of events on polling day. The day would be made a bank holiday and events would include live acts, stalls, games, a float parade and fireworks.

Voters would be sent their election slips through the post and these would double up as an invitation to the event. On the election slip there would be the option of choosing none of the parties and the Government would give a cash reward to the constituency with the highest turnout of voters. The money would be used to rejuvenate the area. Shaw has been awarded £1800 to spend on furthering his design career.

A team of three graphic design students from Kingston University won the other award in this category. Elle Matthews, James Muriel and James Tilley won £1200 for their design of an orange badge in the shape of a cross. People would wear the badges in the weeks leading up to the election to show that they intend to vote and in turn help encourage other people to vote. Once they have voted they turn their badge from a ‘+’ to an ‘x’.

Crawley explains, ‘The problem of voter apathy clearly exists. Exploring fresh ways to invigorate the process is surely worthwhile. Designers have the ability to solve problems and visualise solutions in a variety of new and radical ways and if these can effect positive change, then that must be worthwhile.’

Winners from this and the other categories will be exhibited from 24 May at an exhibition displayed at The Gallery, Pentagram Design, 11 Needham Road, London W11.

The exhibition, sponsored by Royal Mail, will be held for one week, from 23 May.

80 is the number of years the awards have been running

22 days until the winners in other categories are announced

20 entries received for the Voting by Design category