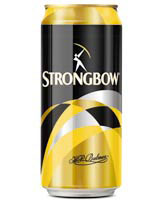 The company is overhauling its Strongbow cider brand, working with Jones Knowles Ritchie on packaging designs and product development, while Brewer Riddiford has designed the bottles for the launch of Kronenbourg Blanc in the off-trade.

The redesigned Strongbow packs will launch to both the on- and off-trade in June. A spokeswoman for Scottish Courage also confirms that a new product is being developed, saying that further information will be announced this summer. The product is thought to be a premium version of Strongbow, although JKR partner Andy Knowles declines to reveal details of the group’s brief.

JKR already worked on Strongbow prior to its move to Scottish Courage in 2003, when Scottish & Newcastle acquired Strongbow parent company Bulmers. The latest round of design comes as part of a £22m investment in Strongbow this year.

Brewer Riddiford’s creative work for the Kronenbourg Blanc bottles takes the white beer into off-licences for the first time. The product was launched by Scottish Courage in the licensed sector in 2003, competing with InBev’s Hoegaarden brand.

Kronenbourg Blanc will be available in 330ml and 500ml bottles in the brand’s trademark ‘Eiffel’ shape. Brewer Riddiford has introduced a glossy, off-white finish to create a point of difference on-shelf.

‘Brewer Riddiford argued that white would communicate difference,’ says Fiona Vernon, Scottish Courage marketing manager, innovation. ‘Being a traditional client we were reluctant [to use white] and developed a brown bottle too, but it was clear in research that the white worked better.’

The product launches on 9 May in Tesco, ahead of a wider roll-out.

Prince and the revolution