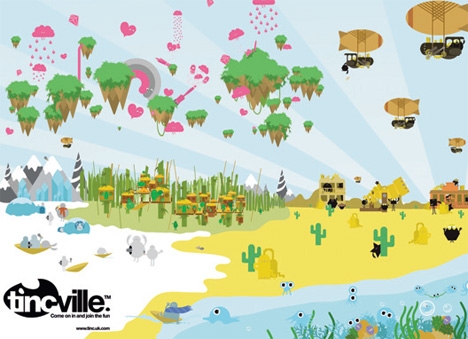 Appointed in January, Somerset-based Hello was briefed to create a website and marketing materials for Tinc. The initial site idea evolved into a junior social network called Tincville (pictured), based around five tribes the Tonkins, Kronks, Huggas, Mallos and Floots.

When users join the site, they join a tribe, each relating to one of the five stationery colours. Users can upload and rate artwork created using the stationery, accruing points for themselves and their tribe.

Parents can load credit on to users’ accounts, which is translated into Tincville currency Pebs, for children to buy Tinc stationery. The parents will then be e-mailed a receipt.

Hello creative director Jamie Gallagher says, ’The kids feel like they’re doing it themselves, whereas parents have this controlled, safe environment.’

The look and feel of the site is inspired by the five tribes, each of which have a distinctive image and back story created by Hello. Kronks are Wild West-inspired madcap inventors, Tonkins have blue tentacles, Huggas are furry environmentalists with giant hands, Mallos are pink and soft and Floots are forced to live in an arctic wasteland as the symbiotic beings that live in their stomach only eat ice cream.

Gallagher says, ’The aim is to breed these slightly competitive tribes of Tincville people.’

The initial e-commerce site, which can be found at www.tinc.uk.com, launches this week and Tincville is due to launch later in the year.

Bristol-based interiors consultancy Simple Simon Design was appointed three months ago to design the first Tinc shop, which opens in Bath this week. Tinc director Jos Baker says, ’We wanted a soft, touchy-feely look to the shop to fit in with the products we sell.’

Museum of London takes to the high seas with pirates exhibition