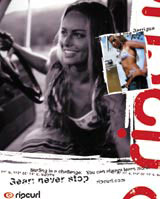 ‘Women have very little idea of how much men hate them’, wrote Germaine Greer in 1971. A little over 30 years later it would be nice to think the sexes are on slightly better speaking terms. But when it comes to design, is the gender gap narrowing?

Designing for women has always been a political hot potato in the male-heavy marketing services industry. And the signs are that targeting by gender is currently out of vogue. It’s just a little passÃ© to be thinking man or woman these days, with lifestyle rather than gender playing an increasingly important role in successful branding.

Only this month, Australian surfing brand Rip Curl hired The Nest to dose down the masculinity of its overtly male-oriented branding (DW 7 August). It was apparently an attempt to engage the overlooked swathe of female customers loyal to the brand, without wrecking the otherwise cool lives of the dudes so important to Rip Curl. As we all know, long hair isn’t just for guys any more.

Then there’s Marks & Spencer. At the end of September Britain’s favourite department store is launching a ‘cross-branded’ underwear label (in contrast to the apparently ‘unisex’ Calvin Klein label).

Okay, so it might think it is ‘exclusively for everyone’. But when M&S rethinks the way it’s going to sell its legendary underwear you know something serious is afoot, regardless of whether Calvin Klein got there first.

The idea is that while the products themselves will be different in shape, style and colour, the unifying element is the branding, designed in-house, which will be one and the same. The range is called MW and features a ‘blue M, pink W’, according to an M&S spokeswoman.

She says: ‘MW is a range of cross-branded lingerie and men’s underwear aimed at the 25-plus market. Obviously there is a synergy in the collection as it comes under one brand, but there are differences in things like the colour palette – men tend to wear less pink after all.’

‘People are shopping differently these days and this brand reflects that. This is more of a lifestyle concept,’ she adds.

In M&S’s case, it’s probably also fair to say that the label will have extra resonance with female customers buying men’s underwear for, let’s call them disinterested, male partners. Though perhaps we shouldn’t rule out the converse scenario altogether.

Other interesting instances of sexual revisionism (for want of an appropriate piece of brand jargon) are in abundance too. Take the Homebase range of Sanctuary paints, launched six months ago, with packaging designed by Carter Wong Tomlin. The product is aimed squarely at women, in a category where it traditionally pays to be wearing trousers.

Another case of androgyny in vogue is the Remington bikini-line razor, which launched in July. While the product is destined largely for the female market, you might not necessarily discern the fact from its gymnastic-sounding ‘Trim and Shape’ name.

Alison Tomlin, joint creative director of Carter Wong Tomlin, says that Homebase packaging has become consciously inclusive of both genders because the retailer has a larger proportion of female customers than its rivals. This has meant discarding the stereotypical masculine-loaded branding that you’d probably expect to find sitting on a dusty DIY store shelf.

‘Women are straying more and more into male territory,’ says Tomlin. ‘We branded a range of power tools for Homebase last year, which was very functional but also a lot more user-friendly looking than usual.

‘[Working on] the brief we were conscious women were going to be users of these tools. We had a hand holding the product as we didn’t want it to be this scary big power tool – the hand consciously implies this product is something you can actually use,’ she adds.

Tomlin agrees that many brand owners today don’t want their products to be overtly gender- specific, as they seek to appeal to the widest range of customers.

She thinks a lot of women would feel patronised by branding that is obviously aimed at them. But while women seem content to stray into male territories, men are still less able to stray into traditionally female corners.

‘Women have always been fairly comfortable with going unisex – wearing men’s shirts and boxer shorts and that sort of thing. The big challenge is to make it palatable to men,’ Tomlin says.

Logic would dictate that the smart thing to do is to have your brand talking to the largest possible audience, which obviously suggests blurring the gender boundary if possible.

A quick scan through the Top 100 brands list reveals that remarkably few brand names have connotations towards one sex or the other. So does it pay to keep your branding neutral?

‘It depends on the category,’ says Enterprise IG client director Beverley Law, who headed up the rebranding of Smirnoff Ice. Formerly known as Moscow Mule, it was found to be alienating the female market.

‘Where gender is vital is in pharmaceutical work. A lot of over-the-counter packaging is actually increasingly feminine because the woman is the primary buyer of medicines for the family,’ Law says. ‘On the other hand, the reason Smirnoff Ice is so clever is because it isn’t overtly masculine or feminine. It works on both levels.’

So what does all this point to? It seems that even in a world of gender-neutral branding, we have been witnessing increasing levels of female-friendly design. Have men become less responsive to brash marketing techniques, or did the balance just need to be redressed?

Who knows, perhaps it was all the beard-focused branding that got too much for Greer.