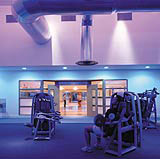 Keep-fit culture has come a long way since Jane Fonda and the Green Goddess. From pumping iron to practising Pilates, there are now numerous ways to keep in shape. How you exercise is as much about fashion, it seems, as fighting the flab.

Spending on health and fitness reflects its growing status as a lifestyle option. Consumers sweated out almost £1.7bn in health and fitness clubs last year (source: Mintel). This figure has grown 145 per cent since 1996 and the market is expected to double over the next five years.

Membership and admission charges represent around 70 per cent of this expenditure, with a further 10 per cent going on one-off joining fees. This still leaves a significant sum for health and beauty treatments, bars and cafÃ©s, which suggests consumers are looking for much more from the experience than a couple of gym circuits.

Traditionally, health and fitness club design has been more readily associated with a Lonsdale than a Gucci belt. But this is changing fast. The multi-million pound KX Gym, which opened this week in west London with interiors and architecture by Thorp Design, is the latest luxury offering. It follows Third Space and Naked, which opened in Soho and Earl’s Court respectively last year. Edinburgh now boasts Escape, owned by the Scotsman Hotel group, and Cambridge has The Glassworks, designed by Conran & Partners.

The fit-out of the £2000-a-year KX Gym (pronounced ‘kicks’ and derived from ‘kickboxing’) is far from run-of-the-mill. Thorp Design managing director James Thorp says it displays a ‘residential mindset in a commercial space’. And he doesn’t mean two up, two down. Thorp’s track record is mainly in designing expensive houses, yachts and planes.

‘We understand what quality is,’ he says. ‘The style of KX evolved from these private commissions. It’s maxi-minimalist, or minimalism taken to a more opulent level.’ Design accounts for more than half a budget in the region of £8m to £10m. There are ebony panels and textured plaster walls. The flooring is either natural hammered stone or teak, Thorp adds. ‘It’s used for yacht decking.’

The positioning, like the look and feel, resembles that of a boutique hotel and is intended to appeal to a similar clientele. So important is location to the target market, Thorp confides, that plans for a site in South Kensington that were ‘shut down a week away from work starting’ when the old Harrods depository in Brompton Cross came up. ‘It’s nothing like a Harbour Club, Cannons or Holmes Place,’ he says.

Ian Sherman, Corporate Edge chairman of interiors and architecture, warns against seeing all health and fitness clubs ‘in the light of KX’. He says, ‘it’s at the extreme end of the market, both in terms of costs and what it is offering.’ Corporate Edge has designed 70 gyms over the past 15 years, including the Harbour Club (first and second time around), Champneys CityPoint and most recently the ‘affordable luxury’ brand Amida, which opened in Beckenham, Kent, last November.

Sherman says, ‘The market has changed massively. Early on, design was not seen as a key element in the mix, but now it’s increasingly important. The market is also broadening and stretching, so it’s inevitable that there is greater segmentation and more differentiation.’

He likens the position of the larger groups, ‘Fitness First, LA Fitness and Cannons’, to that of retailers such as ‘Burton and Top Shop’ in the 1980s. ‘They’re developing and evolving standards,’ he says – but suggests this has led to a generic style.

Bespoke clubs like KX Gym, Third Space and Naked certainly break the mould. But the challenge, Thorp suggests, is integrating the ‘hotel aspects of the operation, like laundry and day-to-day running’ with calm, spacious design. How feasible it is with more typical budgets, though, is another matter.

The wiring at KX Gym is hidden away ‘under the floor, like a dealing room’, says Thorp. Using a PIN, personal fitness programmes can be downloaded to all the exercise machines. Such individualisation also depends on consumers becoming more sophisticated about fitness techniques. KX is ‘very studio and martial arts-based,’ says Sherman. ‘People have to understand training.’

However, what is common to both the high-end and the mainstream market is a broader definition of what gyms are about. Mintel leisure analyst Richard Bowyer says, ‘In general, a more holistic approach is being taken towards health and fitness. Consumers are interested in a wider range of exercise activities, which explains the popularity of Tai Chi and Pilates and alternative therapies such as reflexology and aromatherapy.’

Sherman points to ‘the growth of relaxation’ as opposed to fitness. He describes cardio-vascular gyms as the ‘pump primers of the industry’, but says the Amida concept is ‘not quite 50/50 but 60/40’ in its ratio of fitness to relaxation. Design, necessarily, has to be more ‘warmer, softer, lower-lit, more contemplative’, he suggests. Having more varied spaces will make greater demands on designers.

With its self-conscious exclusivity, KX Gym’s aesthetic will remain aspirational for most. ‘It’s the Ferrari ticket,’ says Thorp. He thinks the technological rather than the design elements will ‘filter down’. But the boutique hotel comparison might suggest otherwise. First there was Schrager, now there’s Malmaison.

Groucho Club owners Matthew Freud and Joel Cadbury, who is also behind Third Space, are understood to be close to buying the 12-strong Curzons chain from Whitbread, while Amida is one of several brands looking to expand. Perhaps the future for gym design is not so much ‘down at the disco’ as ‘off to the spa’.

Kosmos: A Portrait of the Russian Space Age will be published in April