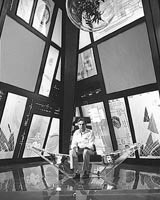 James Bond would have had a very mundane existence if it weren’t for legendary production designer Ken Adam. There were only so many vodka martinis a secret agent could sip before he bit the bullet and infiltrated the villain’s lair, where Bond’s nemesis plotted his fiendish plan for world domination. All the memorable hideouts in those distinctive early Bond films – Dr No’s aquarium, the fictional Fort Knox in Goldfinger where Oddjob met his shocking demise, the volcano in You Only Live Twice that transformed into a spaceship launch centre – all came out of Adam’s stunning imagination.

Professor Sir Christopher Frayling is eminently qualified to write a biography of this pioneering talent. The rector of the Royal College of Art has already written an exhaustive biography of spaghetti western director Sergio Leone and his encyclopaedic cultural knowledge serves him well for this extended interview with Adam.

Adam, a German Jew who was forced to leave Berlin in 1934, subsequently became the only German to fight in the Royal Air Force. Dive bombing German tanks on strafing runs in a single seat fighter gave Adam a taste for speed and he indulged his passion when it came to creating Bond’s gadgets, such as the Aston Martin DB5 with all sorts of nasty modifications or Little Nellie, the lethal gyrocopter.

It was Adam’s work on Stanley Kubrick’s Dr Strangelove that won him the work on the Bond movies. The war room where Peter Sellers played out his hilarious schtick was a magnificent expressionistic vision. A cavernous triangular bunker with maps to show the bombers approaching their targets; the space was the perfect backdrop for Kubrick’s savage brand of anti-war satire. Another key scene in the film, when Slim Pickens drops out of his plane’s bomb bay doors riding its nuclear payload, was a rushed improvisation. At the last minute Kubrick demanded a full-sized set, forcing Adam and his team to burn the midnight oil to create a believable mock-up. Frayling and Adam discuss the scene in depth, illustrating the ingenious talent that could create such a memorable scene virtually overnight.

Adam had many other triumphs – he drew the original sketches for Star Trek’s Starship Enterprise, he created the style for Bond’s down-to-earth alternative, Harry Palmer in The Ipcress File and Funeral in Berlin, building a gothic, gloomy world that provided a stark contrast to the hi-tech modernism of Bond’s surroundings.

It was the surreal decadence of his sets that made Adam such a hit with audiences and critics. As Frayling notes, ‘[The] work looks real, but there’s always something magnified about it that creates an effect in the mind of the audience.’ Adam took you away into a sleek, idealised world and Frayling’s book gives you a fascinating insight into the mind and methods of a unique talent.

Ken Adam: The Art of Production Design by Christopher Frayling is published by Faber & Faber on 15 September, priced at £20