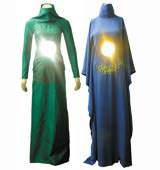 Islamic art, Sony’s PlayStation Portable and London’s East End? Strong stuff. It’s been a bad two weeks in London. A green, geometric typeface that looks like Arabic, but actually reads in English flags an exhibition showcasing contemporary Arabic graphics and calligraphy sponsored by PSP at the Truman Brewery on Brick Lane, default choice of leftfield(ish) venue bookers. The work is produced by artists who have brought a fresh outlook to this craft. Some is beautiful; the work of Iraqi-born Hassan Massoudy and Turkish group Inspiral Design stands out, while other works are less memorable. Some of the marks are reminiscent of Pong era computer graphics and while it is all visually strong, the representations of Sony PSP’s brand values make some of it feel a little like advertising. As a series of prints, the graphic imagery fascinates, but as few of us read Arabic, it becomes a question of form. Some of the artists seem to be making the connection between the Arabic geometric tradition and computer-generated art. The rule-based structure of the graphic forms is driven by code in the same way as a computer’s processor, but whether Sony is making this connection or just indulging in a marketing wheeze is another matter.PSP presents The Beautiful Script runs from 5 – 14 August at the The Dray Walk Gallery, Old Truman Brewery, 91 Brick Lane, London E1. Mat Cook is design director of Intro